Watch: ‘Whiplash’ Is a Story Told Through Sounds and Close-Ups

I often thought, while watching ‘Whiplash‘, that I might be able to get as much out of it with my eyes closed as I would with my eyes open. Damien Chazelle invested an incredible amount in the auditory effects of this film, as befits a movie about musicians–it’s in the actors’ voices, in the booming sound of J.K. Simmons’ voice or Miles Teller’s post-adoloscent rasp, but it’s also in the music, stopping and starting, proving exhilarating once we’re finally allowed to hear the title song continuously. That said, though, if you simply listened to the movie, you’d miss its odd use of close-ups: hands, drumsticks, drums, sheet music, car wheels, keys, clocks. As these images accumulate, they begin to give metaphorical weight to the film’s simple, old story, telling another story about the difficulties of learning, growth, and survival. This new piece by Jorge Luengo shows a side of the film that is, in the final analysis, the film’s better side: an underpinning of craft behind a vehicle for two talented actors.

Watch: The Editing in Damien Chazelle’s ‘Whiplash’: A Closer Look 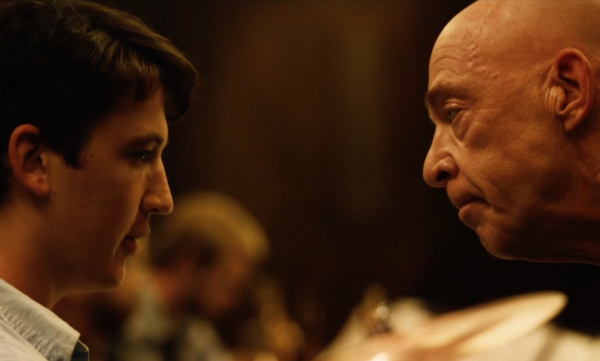 In one sense, you could ask what else there is in Damien Chazelle’s ‘Whiplash’ but the editing. The performances by character-acting veterans like J.K. Simmons or Paul Reiser are remarkable, as is the intense, vulnerable work of Miles Teller, but what really holds the film together, to paraphrase a certain classic, is the splicing of one shot over another over another… This piece by "Robigo TV" is an acute look at Chazelle’s recent film, with a lot of persuasive enthusiasm. You could say the writing could be dusted off, or you could take issue with the video’s near-half-hour length, but you can’t fault the closeness of its attention, or, really, its accuracy.  As we walk through several of the most intimate and hard-hitting scenes of the film, we get to know the work and its characters better, and we also remember the importance of editing in film, all too often taken for granted. This piece is an act of true appreciation, and the appreciation is contagious.