Anyone who likes Greek tragedy should, by rights, appreciate Stieg Larsson’s Millennium Trilogy, a series of books built on the power of revenge, and the catharsis that grows out of it, a catharsis so palpable it’s practically sexual. The revenge scene in The Girl with the Dragon Tattoo, the trilogy’s first volume, unfolds at a pace that is as scorching as it is satisfying, as Lisbeth Salander, the punkish information scientist thug genius, punishes her perverted legal guardian for his brutal molestation of her. When Niels Arden Oplev and David Fincher adapted the book for the screen, they took different approaches to this scene. While one version is not necessarily less fist-pump-worthy than the other, watching the scenes side by side points up crucial stylistic differences between the two directors. Here to walk us through these differences is Kevin B. Lee, for Fandor. It’s all spelled out for us here, with great care–and with huge captions! Enjoy! (If you have the stomach for it.)

In one sense, and a very large one, in fact, a story is only as good as the perspective from which it is told. Great Expectations might be a lesser tale without the semi-annoying Pip to tell it. Think of Gillian Flynn’s Gone Girl without the author’s relentless play with points of view. Lewis Criswell’s video essay not only shows us how Bong Joon-Ho’s ‘Memories of Murder‘ influenced David Fincher’s ‘Zodiac‘–and convincingly, given that, as presented here, the one often looks like a blueprint for the other, down to characters’ facial expressions–but also that stories like the one told by both of these films, in which the center of the story, the serial murderer, remains elusive, must rely on the perspectives of their tellers, the characters within the story. Reliable or not, the individuals wrestling with the problem at the story’s heart become our guides through the film. If the mystery remains unresolved, so, too, do the characters remain unresolved or unreachable within viewers’ minds.

The latest installment in Raccord’s excellent series on David Fincher takes up some of his more knotty work–namely ‘Zodiac’ and ‘The Curious Case of Benjamin Button’–along with the commercial work addressed earlier in the series. We can see Fincher developing here, focusing in on a kind of intricacy that may have been akin to intellectual play for him in his early films, the fulfillment of an inner desire to communicate, but becomes a kind of ars cinematica as his work matures. By the end of this in-depth piece, which includes many clips of interviews with Fincher and others, the journey from the gangly robot of Fincher’s famous Adidas commercial to the wizened Brad Pitt of ‘Benjamin Button’ or the obsessive Jake Gyllenhaal of ‘Zodiac’ seems a quite logical one, almost inevitable.

Watch: What Makes ‘House of Cards’ A Success? 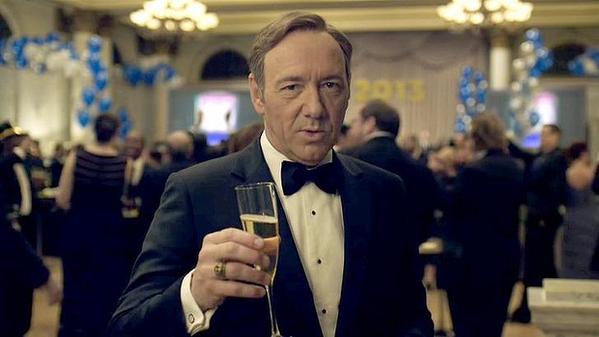 As I’m fond of saying, nothing happens without a reason. That film you love, the one you can’t stop re-watching? That scene you discuss for hours? That dramatic climax that caps anything you’ve seen before? It’s the product of deliberation, planning, calculation: a director whose work is memorable becomes that way because he or she wants it to be that way–and to do that, layers of hard work have to be poured on, making what seems to you like an effortless product but is in fact anything but. In the case of David Fincher’s ‘House of Cards,’ the first series to make Netflix a credible location for entertainment, there are several factors in play, some we know and some we don’t, nicely enumerated in this brief but dense analysis by Elena Ishchuk: breaking the 4th wall, dynamic use of lights and darks, determined use of blues and yellows, centralized shots, and others. If you haven’t yet dipped into what many deem an addictive series, powered by Kevin Spacey’s demonic drawl, this piece might be a nice introduction for you.

Steven Spielberg and David Fincher make for a more likely chain of influence than one might think. It might boil down to this: same audience, different focus. Spielberg reaches towards broad themes intended for a wide audience; Fincher seems to have made it his mission to bring the dark side of humanity (the torment, the obsession, the rage, the calumny) to, like Spielberg, as wide a viewership as possible, with films like ‘Seven‘ and ‘The Social Network‘ in particular. Michael Bryant has narrowed this comparison considerably in this pithy video, bringing these two cinematic minds together in a rare and convincing way. So: how did Spielberg influence Fincher? Fincher seems to have absorbed Spielberg’s filmmaking techniques and presented them to us transformed. Look and see… 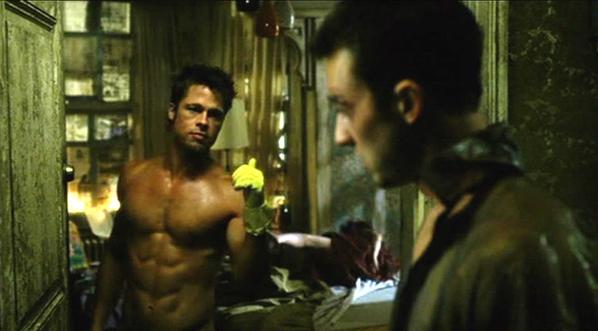 David Fincher’s work, if about nothing else, is about enclosure. This enclosure can take different forms, from the walls of a spaceship in ‘Alien 3‘ to the boundaries of friendship in ‘The Social Network’ to the psychological wall Lisbeth Salander places between herself and the world in ‘The Girl with the Dragon Tattoo.’ The films discussed in this, the third installment in the Raccord collective’s series on Fincher: address enclosure of a more direct kind: the confines of an office bulding in ‘The Game,’ the strictures of a clandestine secret society in ‘Fight Club,’ and the literal walls of a safe space in the process of being invaded in ‘Panic Room.’ The video takes us inside the eccentricities of Fincher’s technique: his penchant for multiple takes, his meticulous planning of characters’ movements and of the spaces they move through, and his miniaturist’s attentiveness to interior details–as well as, of course, his love of breaking the fourth wall, as he did in ‘Fight Club’ and again in Netflix’s ‘House of Cards.’ If the first two installments took us through the director’s artistic adolescence, this 30-minute installment of the series shows us how Fincher has flourished in his adulthood.

Watch: David Fincher’s ‘The Girl with the Dragon Tattoo’ Is a Symphony of Angles

When I first learned that David Fincher would be directing the American adaptation of Stieg Larsson’s ‘The Girl with the Dragon Tattoo,’ I was a bit concerned: I was partial to the original Swedish adaptation, to Noomi Rapace’s steady glare, which somehow managed to be both understated and aggressive, simultaneously. Beyond that, I wasn’t sure what Rooney Mara could do with Lisbeth Salander–she had projected strength in ‘The Social Network,’ but the capacity for violence seemed a bit of a stretch. Also, Fincher tends to devour when adapting–he turned ‘The Curious Case of Benjamin Button‘ into such a distinctive creation that, sadly, many critics ignored the marvelous F. Scott Fitzgerald story on which it’s based. This movie was a slightly different case: Fincher does consume and re-interpret the original text, but the consumption here is in service of the book, and as such is a (literally) thrilling visual phenomenon. Kristin Slater’s restless and forceful piece points out something integral to the film’s approach: that its angles tell a greater story, in some ways, than the script. That the constant adjustment and rejiggering of the viewer’s perspective takes us quite convincingly inside the mind of Lisbeth, into her unique and tortured way of seeing the world. Unstable? Perhaps. Or maybe just… correct.

Watch: David Fincher, From His Commercials Up to ‘Se7en’: A Video Essay

This piece, the second part of a prolonged series on David Fincher, takes us inside the work leading up to ‘Se7en.’ Fincher made, prior to this remarkable film, a number of inspired and influential commercials for Nike, Coca-Cola, and other companies. And it could be said that he brought his gift for rattling around inside a form to ‘Se7en’: just as he did with the constraint of creating an advertisement, he took what could have been a fairly routine police procedural and transformed it into a horror-show on more levels than just the "what’s in the box" level–professional integrity, marital stability, and the nature of masculinity are all questioned and examined inside a film that unfolds like the best yarn you’ve ever heard. The Raccord collective is making a significant contribution to film scholarship with their directors series, and it behooves any earnest film fan to take heed.

Watch: 7 Reasons Why KISS ME DEADLY Is the Greatest Noir Film of All Time

Quentin Tarantino in ‘Pulp Fiction.’ David Fincher in ‘Se7en.’ David Lynch in ‘Lost Highway.’ These directors, and many others, were all influenced by Robert Aldrich’s 1955 film noir milestone ‘Kiss Me Deadly.’ In this haunting and frequently inspired piece,

Alexandra
Königsburg lists seven reasons why the film is so important–and in so doing she manages to bring in everything from ‘Friends’ to Ronald Reagan. The film itself was a bizarre masterpiece, but this analysis by Königsburg is a challenging work on its own, acquiring independent power as it moves along.

Watch: Why the Beginning of David Fincher’s ‘Se7en’ Is the Perfect Opening Sequence 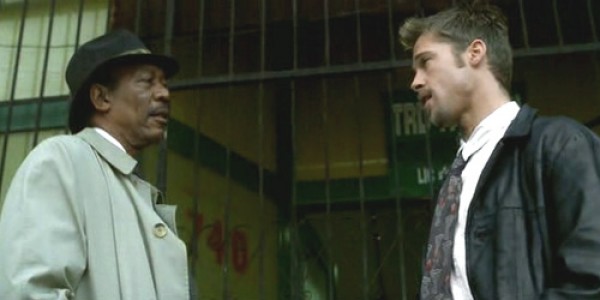 A filmmaker once told
me that exposition in dialogue must be stated twice if anyone is going to
remember it. The opening to David Fincher’s ‘Se7en’ introduces the
protagonists, sets up the initial premise, and displays how their different
personalities will clash throughout the film. Not only does it do this in less
than four minutes, but it manages to communicate this information twice. It was
fascinating to discover that this simple and graceful opening was actually
pieced together from a much longer opening, which contained details that were
meant to make appearances throughout the film. Due to the inability to move the
production to New York for a shot of Morgan Freeman on a train bound for the
city, the opening was ultimately carved up and rearranged into the one we now
know. Without this turn of events, we never would have gotten the brilliant
opening credits sequence that was made to replace the train shot. The trimmed-down opening gives us the opportunity to jump right into the story.

Tyler Knudsen, a San
Francisco Bay Area native, has been a student of film for most of his life.
Appearing several television commercials as a child, Tyler was inspired to
shift his focus from acting to directing after performing as a featured extra
in Vincent Ward’s What Dreams May Come. He studied Film & Digital
Media with an emphasis on production at the University of California, Santa
Cruz and recently moved to New York City where he currently resides with his girlfriend.

For more of Tyler’s video essays, check out his channel at youtube.com/cinematyler.