Apocalypse TV: Between the Reality and the Dream 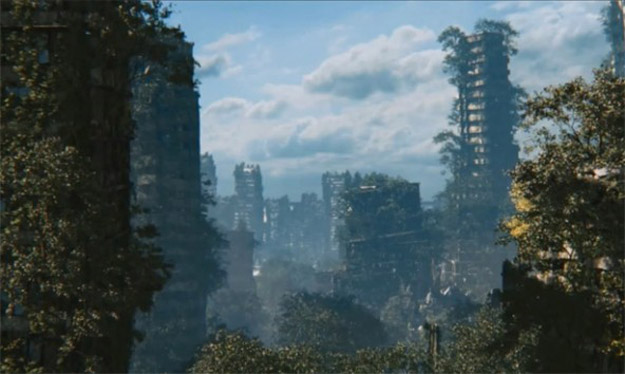 Right now, the apocalypse is hip. Revolution and The Walking Dead are two of television's biggest success stories this season. The former is a surprise success for NBC, which is struggling otherwise, while the latter is breaking cable records on AMC. But the settings of these shows have more in common than their apocalyptic nature. The quality of their apocalypses, the drama they're attempting to mine, and the aspects of modern society they choose to discuss reveal a great deal about modern anxieties about population,  morality, and climate change. But they don't necessarily confront these issues, head-on. Instead, they offer a “do-over.”

Speculative fiction has often examined contemporary anxieties, either consciously or not. In the 1990s, the fall of the Soviet Union led to a world quite different from the bilateral world most American TV writers and viewers of that time had grown up with. This world was characterized by a distrust of American governments, or governments similar to ours. The X-Files is the most famous example of this conspiracy-theory mindset, but it was joined by Star Trek: Deep Space 9—a relatively cynical take on the future compared to its utopian Star Trek predecessors—and Babylon 5, in which an American-style government called EarthGov was corrupted into dictatorship. The terrorist attacks of September 11th, 2001 pushed SF TV in a still more different direction. Shows like Battlestar Galactica, Firefly, Angel, and the literally and figuratively more realistic 24 all dealt with the moral issues and compromises of being a leader in a fight against evil.

While both Revolution and The Walking Dead are clearly descended from these previous stories (imagine Rick, Shane, and Dale as Adama, Tigh, and Roslin from BSG during some of their ethical arguments, for example), their settings focus their cultural anxieties. The shows both take place on Earth, in a semi-recognizable America, after or during a massive population apocalypse caused by something that, at least at the beginning, is unknown. On Revolution, it's the end of electricity and modern technology; on The Walking Dead, it's a zombie plague. In both cases, it's a new, harsh world, where characters used to the amenities of modern life like the video game Portal or their iPhone have to cope with facts of day-to-day reality instead of the contrivances of society. And in both cases, civilization itself may have been the cause of the apocalypse. Both shows revolve around debates of how civilization is being reborn, whether it deserves to be reborn, and whether American ideals of rights and justice can work in apocalyptic settings.

The core anxiety is straightforward: there are too many people for civilization to be sustainable. This is a common worry. For some people, the concern is that high-population areas are immoral, breeding grounds for sex and violence; for others, the thinking is that too many people consume too many resources, which leads to climate change. In both cases, there's a general belief that there are too many people whether they be sinning via sexuality or via energy consumption. The former attitude exists to a certain extent on both shows. Revolution's post-apocalyptic setting opens on a pastoral farming community whose peace is shattered by people who want to bring the worst of civilization back. Meanwhile, The Walking Dead moves out of the dangerous city to Herschel's farm, a seemingly safe chance for the characters to regroup and survive the apocalypse.

But it's the latter issue, that of climate change, that drives the recent popularity of the population apocalypses. Rapid climate change could be seen to indicate that we're undergoing a slow-motion apocalypse; it's something that affects us at a personal level, and it is both uncontrollable and unstoppable. Finally, it's something that, at its worst, will force Earth’s residents to focus on the facts of existence on the planet, like extreme weather events, food and water shortages, mass extinction, and potential political destabilization, while our social and technological focuses (including television!) are already often derided as distractions preventing the masses from pushing to make the world a better place. These two apocalypse-based shows thus function as allegories for climate change's worst-case scenarios; the grittier, more violent cable drama The Walking Dead portrays a world without hope while Revolution is notably brighter in tone, though not exactly uplifting. But they only function as allegories, manifesting an anxiety—will the world go to hell?—without actually engaging with it.

These two shows clearly blame the apocalypse on the flaws of civilization, but they're not alone. 2011's short-lived Terra Nova—the Revolution of its Fall television season—was entirely explicit about this role. The show was set on normal Earth, hundreds of years after a slow environmental apocalypse, with the sky covered by pollution and society governed by rigidly enforced population controls. But a magical discovery led to the chance to travel back in time, and build the colony of “Terra Nova.” This was an idyllic colony set on dinosaur-dominated Pangaea millions of years in the past, with its name's translation, “New World,” demonstrating the show's focus. The characters even state that this colony offers a chance for them to rebuild civilization without making the mistakes, technological and moral, that forced humanity down a dark road. Terra Nova was a second chance, a do-over.

Both Revolution and The Walking Dead engage with the idea of the do-over. The institutions and leaders who failed or are failing to protect society from collapse are gone, but so too are the real-world effects of their failures. Global warming is irrelevant. These shows may use some of the symbolism and anxiety of a climate apocalypse, but they avoid dealing with it head-on, inadvertently promoting the idea that something almost magical will prevent us from having to deal with the excesses of civilization. This isn't necessarily just a component of current broadcast television: a 1990s version of Terra Nova and Revolution, SeaQuest DSV, was premised on overpopulation, resource exhaustion, and rising oceans from climate change.

But you don't even have to go back in time to see impending, uncontrollable societal collapse due to both climate change and immorality in a speculative fiction TV series. HBO's Game Of Thrones provides a mirror image to the apocalypses on Revolution and The Walking Dead. It takes place in a world unrelated to modern Earth, yet this just makes its allegory stronger. From the very beginning, the idea that “winter is coming” pervades the series, but the “is coming” shows that the apocalypse is on its way, instead of having happened already. And the “winter” exists in the literal sense, allegorical sense, and a magical sense. The season lasts for years in the world of Game Of Thrones, and this particular winter is expected to be harsh. The “winter” also refers to the brutal civil war that envelops the Seven Kingdoms and beyond. Additionally, there's a supernatural threat of dark, uncontrollable magic returning to the world.

Game Of Thrones' allegorical examination of climate change ties in directly with its concept of leadership. Almost all of its characters all ignore the impending climate and supernatural disaster. These men and women making crucial decisions in Westeros are small-minded and petty, or ambitious and self-serving, or in the best case, good people who are forced by honor or obligation to do the wrong thing. The latter is true even of the heroic Robb Stark, whose decision to march south for his family's honor and to attempt to repair the Seven Kingdoms is described as a mistake by Osha, a “wildling” whose time north of “The Wall” gave her direct experience of the impending apocalypse in the south. She says he should have turned his army north, toward winter and the supernatural invasion instead of south to fulfill the obligations of his political system.

Robb's (and others') inability to break the cycle of civil war and violence is a clear commentary on the failures of real-world political leaders to see beyond smaller, short-term political considerations in order to solve larger problems, such as the failure of the Copenhagen Summit in 2009.  Perhaps most importantly, Game Of Thrones is built on the idea that the sins of the past destroy the hope of the future. The civil war of 15 years prior is a direct cause of the contemporary battles of the show, and the mistakes the characters make in the present, like Ned Stark's attempts at honor proving his downfall in the first season. The world of Game Of Thrones neither forgives nor forgets, and a do-over? Unthinkable.

This is not to say that the creators or fans of these shows view them as being explicitly about issues of population, climate change, or morality—that would be an especially difficult claim to make given that both The Walking Dead and Game Of Thrones are adaptations of older, already popular works. Rather, the point is that the popularity of certain kinds of apocalypse shows, both with the executives who greenlight them through the difficult pitch process and with the fans who support them, illustrates a need for these stories. The need comes from a feeling that something has gone horribly wrong with our political systems, with our societies, with our world, and with civilization itself. Television shows like The Walking Dead and Revolution draw power from the tension between our society's apocalypse anxiety and an allegory that trades complicated real issues for simple, if horrifying, escapism.

Rowan Kaiser is a freelance pop culture critic currently living in the Bay Area. He is a staff writer at The A.V. Club, covering television and literature. He also writes about video games for several different publications, including Joystiq and Paste Magazine. Follow him on Twitter at @rowankaiser for unimportant musings on media and extremely important kitten photographs.

One thought on “Apocalypse TV: Between the Reality and the Dream”