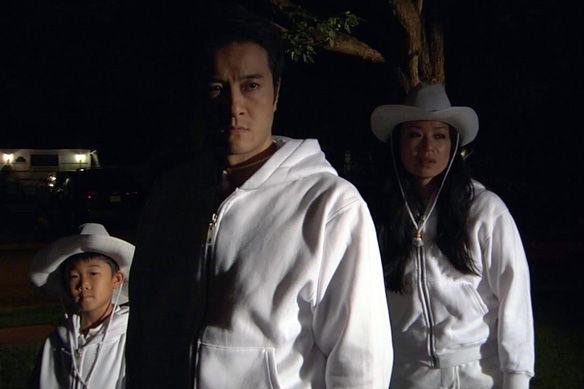 This is Press Play Theater, a streaming video feature that showcases notable work by independent filmmakers in one-week exclusive runs.

Our debut offering is God’s Land (2010), the second feature by Long Island-based director Preston Miller. It’s a drama about a family that joins an apocalyptic religious cult in Texas. It fictionalizes the true story of the Chinese Soul Light Association, or “True Way,” a Christian group from Taiwan that settled in 1997 in Garland, Texas. The group’s faith mixed aspects of Taoism, Buddhism and belief in UFOs, and a conviction that so-called civilization, which had lasted thousands of years, was just temporary, a way station en route to something more profound. The group’s members dressed in white sweats with white cowboy hats. In 1998, followers readied for the end of the world, which they believed would be signaled by the appearance of God on TV.

Miller’s film retells a version of the story through the eyes of one family: a true-believer husband named Hou (Shing Ka), his innocent son Ollie (Matthew Chiu), and his wife Xiu (Jodi Lin). Xiu is the closest thing to an audience surrogate in God’s Land: she’s a sophisticated woman from a rich family who doesn’t really buy into the prophecy but has followed the family to Garland to protect her son and support her beloved husband’s faith in the group’s leader, Teacher Chen (Jackson Ning).

Taking his cues from meditative European Art Cinema, Miller stages the tale in unbroken, often static long takes that make us think about these spiritually-driven characters in relation to their mundane, somewhat impersonal environments: motel rooms, malls, supermarkets, nondescript suburban streets. As we watch the family struggle to commit to Teacher Chen’s otherworldly vision, we think about how the modern world makes faith (or mysticism) difficult. The cult’s members are surrounded by symbols of the modern “fallen” world that will theoretically be wiped out, one by one, by God’s judgment. It’s an eerie yet unexpectedly warm movie, one that observes the passion of its characters with empathy but no harsh judgment.

God’s Land is presented in its entirety at Press Play; click the Vimeo link above to watch it. The movie will be available on the site Oct 19–25.

Miller has also been kind enough to upload two supplemental clips: a sequence showing reporters besieging the group’s headquarters, featuring voice-over commentary by Miller and yours truly; and an interview with Richard Liu, who served as Teacher Chen’s interpreter. (A complete transcript of the March 15, 1998 press conference wherein Chen announced the end of the world can be read here.)

God's Land will be available for purchase on DVD in November, check www.vindaloophilmwallah.com for more details regarding the release date and information on the film.–Matt Zoller Seitz

Preston Miller was born and raised in Raleigh, North Carolina. He attended Appalachian State University for three years before transferring to City-College of New York. There he graduated in 1995 with a Bachelors of Fine Arts with honors in the Communications, Film & Video Department. He currently resides in the New York City area with his wife and their two sons. Miller's first film was Jones (2007).

Matt Zoller Seitz is a co-founder of Press Play.