OSCARS DEATH RACE: THE GIRL WITH THE DRAGON TATTOO 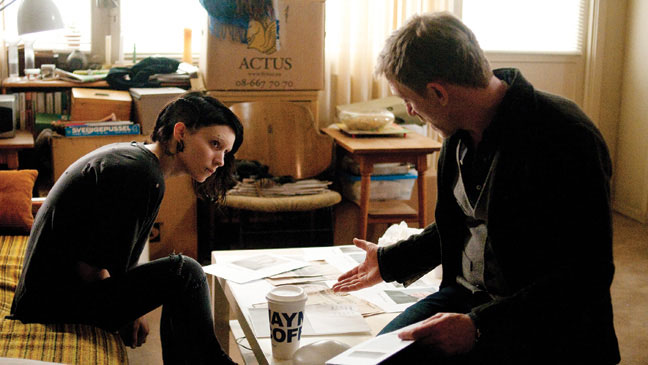 [EDITOR'S NOTE: Fearless Sarah D. Bunting of Tomatonation.com is making it her mission to watch every single film nominated for an Oscar before the Academy Awards Ceremony on February 26, 2012. She is calling this journey her Oscars Death Race. For more on how the Oscars Death Race began, click here. And you can follow Sarah through this quixotic journey here.]

A disgraced journalist, Mikael Blomkvist (Daniel Craig), is called to the home of aging magnate Henrik Vanger (Christopher Plummer) to investigate an ancient crime in the magnate's family — the disappearance and presumed death of Vanger's niece, Harriet, decades ago. Parked in a drafty cabin on the island where many of the Vangers still live (and back-bite), Blomkvist looks into the locked-room mystery, and as matters become more complex, he requires a research assistant — the same researcher, it turns out, who dug into him at Henrik Vanger's request. This researcher is, of course, the eponymous Girl, Lisbeth Salander (Rooney Mara): pierced, bony, rendered by turns mute and blunt by traumas past and present.

It takes about 45 minutes for their paths to converge, but the time is enjoyable. The entire movie is enjoyable, even when it's difficult (That Scene) (also, That Other Scene), or predictable (you can throw as much Stellan Skarsgard at the trope as you want, but it's still a Talking Killer), or disappointing (it's not a travesty that Mikael and Lisbeth start Doing It or anything, and it leads to a couple of good lines, but Craig and Mara had such sparky and fun partner chemistry that that subplot came off lazy). I hadn't read the books or seen the previous version of the filmed story, so I had no preconceptions about Fincher's version — except that I would only spend two and a half hours plus with that material because of Fincher.

I should warn you now that I'm one of Those Zodiac Cultists who bangs on about how the Academy jobbed that movie, Downey is awesome in it, blah blah blah, and I'll skip the bulk of the harangue, but that film showcases what I liked about Dragon Tattoo: the little moments in longtime/working relationships. Fincher's good with a credits sequence (Panic Room) and good with a tricksy time lapse (Zodiac), he varies his shots in their angles and lengths and his cutting team keeps things interesting and on pace. But my favorite Fincher thing is how he lets his actors work with each other, letting gallows humor percolate up, waiting for that exchanged eye-roll. There's an understanding that the characters have interior lives, opinions about sushi and double-parking, entirely outside of the film's plot. Some of that proceeds from the scripting, obviously, but it's seldom the same writer on each movie, and that wouldn't explain the seemingly uniform respect the films have for the partnership vibe. Nobody gets better play on an actor's face when his/her character is struggling not to call a higher-up a fucking moron than David Fincher. Probably not what he wants on his tombstone, but it's nice for Rooney Mara under the circumstances.

Mara's very good; she doesn't take shortcuts where many actors would, and her stoniness isn't uniform — sometimes it's just stony, blank, but at other times her face wavers, and you can see the effort of control and how tightly the lid is clamped. She lets us know Lisbeth as who she is, not just what we get to see her do. That nuancing is one of those "if you don't notice it, that's how you know it's good" things, so it's nice to see it recognized by the Academy even if the performance functionally can't win. Mara works fantastically with Craig, too; at the end of the movie, I was bummed, not because of the lonely-hearts twist (that was merely annoying) but because I wanted to keep watching them hang out together. I felt the same way at the end of Zodiac — can't Downey and Jake Gyllenhaal get a TV show and solve cases together while wearing terrible '70s scarves? One that airs every day? At…my house? Kudos to Fincher for getting these performances, and also to his casting director(s), who always set him up nice. (Robin Wright, usually not my jam, turns in the second textured performance of the year that I loved and nobody else noticed. And yes, I am also That Guy Who Won't Shut Up About Rampart.)

Probably the best possible treatment of the material, based on what I know of it; solidly captivating and nice to look at. Hard to say why it didn't get a Best Director nod, but it wouldn't have won that anyway, and it likely won't win anything else. Still, as my man Joe Reid says, it's a good sit.

Sarah D. Bunting co-founded Television Without Pity.com, and has written for Seventeen, New York Magazine, MSNBC.com, Salon, Yahoo!, and others. She's the chief cook and bottle-washer at TomatoNation.com. For more on how the Oscars Death Race began, click here.

4 thoughts on “OSCARS DEATH RACE: THE GIRL WITH THE DRAGON TATTOO”