Watch: How ‘Mad Men’ Is A Close Cousin to ‘The Swimmer’

It would be hard for me to choose a favorite, or even a favorite six, among the stories of John Cheever. Maligned though he may have occasionally been for grounding his tales of inner abstraction and desperation in the white upper-middle New York suburbs, it was what he did with his setting that really counted: the imaginative leaps, the shocks, the lines of articulated despair, falling into crisp, less-polluted air. It was this Cheeverishness that drew me to ‘Mad Men’ first, and held my attention; the sense that Matthew Weiner was not only trying to teach his viewers about the evil 1960s but also trying to transport them into Cheever’s universe gave me great admiration for the show. My admiration was not consistent, which I view as a sign of mental health, but the Cheeverishness was. Matt Zoller Seitz and Nelson Carvajal do noble and smart work in tracing the links between Cheever’s immortal story, ‘The Swimmer," Frank Perry’s film of same, and ‘Mad Men’ in this video essay for Vulture and RogerEbert.com. In the film adaptation, Burt Lancaster plays Ned Merrill, a suburban gentleman (possibly) who swims across his municipality by leapfrogging from pool to pool, a journey that takes him through various substrata of his particular layer of culture, a journey that, ultimately, leads him to an enigmatically empty destination: his own home, windows darkened, doors locked. What better progenitor for ‘Mad Men’? After all, doesn’t Don Draper take this journey every day, a long, winding trip through entitlement and intrigue and interpersonal slaughter, at the end of which all he has to look at is his own deceptively blank face? Carvajal, known in some quarters as the "Sultan of Splice," is in fine form here, snipping and sampling and matching clips with admirable adroitness; Seitz brings his near-encyclopedic knowledge of, and obsession with, the show, as well as his profound understanding of Cheever’s work, to bear in his analysis. This is a good watch, and a good encouragement to go out and buy Cheever’s Collected Stories. It’s a red paperback, big enough to fit in your pocket, and just large enough to shape your mind for the rest of your life.

Watch: Spike Jonze’s ‘Her’ and the Physical Act of Loving 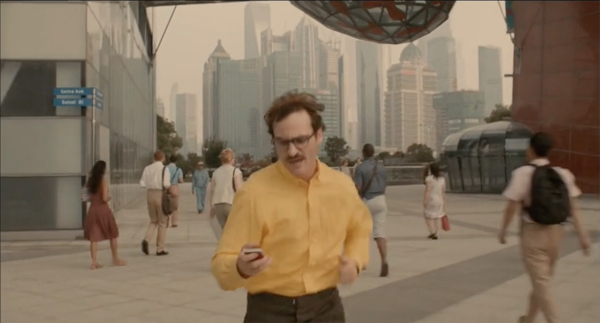 Spike Jonze’s ‘Her’ is an entirely physical movie. Much has been made, and perhaps seemingly justifiably, of the inward nature of the love relationship it describes, that between Joaquin Phoenix’s Theodore and Scarlett Johansson’s virtual Samantha, and yet the reality is that all we really pay attention to in the story is the action, or the physicality: Theodore running through a crowd, Theodore tripping and falling, Theodore’s human largeness by comparison with Samantha’s smallness or even invisibility. And look at the actors Jonze chose for the parts: Phoenix has been fairly compared to Brando for the degree to which he inscribes his roles on the screen with the power of his gestures, his physique, his face; and surely Johansson owes her allure in equal parts to the mind at work behind her portrayals and the voluptuous presence she brings to them, which she’s able to suggest here with only her voice. Michael Mclennan’s gorgeous, attentive video essay traces movements in this film, namely ascents and descents, as indicators of emotional fluctuation, of growth and change, giving us a window into the film’s quiet, sad beauty.

Watch: The 2016 Oscar for Best Actress: One Critic’s Approach

How *do* you determine who should win an award as grandiose as "Best Actress"? Do you flip a coin? Do you murmur an incantation? Is there someone you’re supposed to call, or possibly a helpline? Because surely the process by which the Academy makes these choices is anything but rational. What’s the lay-viewer, or even the not-so-lay-viewer, to do? Kevin B. Lee, in this video essay for Fandor (one of an ongoing series), has taken a quasi-mathematical approach to the choice for Best Actress, looking at the amount of time Cate Blanchett, Saoirse Ronan, Jennifer Lawrence, Brie Larson, and Charlotte Rampling spend on screen, in minutes and hours, and then evaluating how effectively that time is spent. Sort of an equation, sort of… not. Which is about as practical an approach to the decision as I could imagine. Take a look.

Terrence Malick isn’t so much a filmmaker as a poet.  Rather than relying on traditional narrative framework (especially in his later films), Malick relies on nature to create visual poems on celluloid.  Blindly picking a random frame from Malick’s modest filmography, there is a rather high chance of a close-up of a plant or a wide landscape free of humans.  This is because nature itself is a character in a Malick film–sometimes even more so than the human characters.  There is a reason why Malick often chooses to cut to a blowing leaf or a low-angle shot of tall trees during moments of poignancy.  In a way, these images express something that more traditional misty-eyed close-ups of professional actors simply cannot.  We learn more from lingering on a stream than we do from dialogue.  The swaying tree tells us more about a character’s past than flashbacks can.  Rays of sunlight through a rain-forest canopy put the entire film in perspective.  While these elements may be simple, they seem to be something only Malick can pull off successfully.  Many filmmakers are inspired by them and even more copy them, but only Malick can create in this way.  His imagery possesses a certain level of truth due to the fact that he himself finds stories in nature.  Here is a look at some of Malick’s best shots of his favorite storyteller, nature.

Watch: Martin Scorsese Embodies a Clash Between Neo-Realism and Postmodernism

The Film Theorists have hit on something crucial about Martin Scorsese in their newest video essay, which is that his movies rely on the tension between the everyday, the grit, the grim, the signs of humanity at its worst, and an ongoing desire to transcend that element through cinematic technique. In ‘Goodfellas,’ we see the humble upbringings of the titular thugs contrasted with outsized violence, outsized dreams, outsized immorality. In ‘Raging Bull,’ we see the simplicity and primacy of boxing itself re-cast with outrageous camera angles, distended perspectives, drip-slow motion. And on and on. The makers of the video describe this tension in terms of the director’s lineage, his roots in the neorealism of Rossellini and Fellini, and the explosion that occurred when the director discovered these paradigms could be subverted–but the tension could be more integral than that, perhaps something within Scorsese himself that, like many geniuses before him, is able to maintain two contrasting ideas in mind at the same time.

As Scout Tafoya points out in his 25th installment in the "Unloved" series of video essays on under-discussed films for RogerEbert.com, we live in a culture in which fandom is often mistaken for cultural awareness, in which celebrities are like kings surrounded by flailing, worshipful peasants. Patton Oswalt’s New York Giants-worshipping Paul Aufiero in 2009’s ‘Big Fan‘ would seem to be a natural product of this sort of national impulse, the tortured, embarrassing result of a world in which following greatness might be considered a step towards achieving greatness of one’s own, when in fact, an entirely different set of activities is required. As in this film, our attempts at getting closer to those we idolize are rendered even more painful when the results of our labors are not what we were expecting. Oswalt’s work in Robert D. Siegel’s film was riveting, like a well-acted car crash; Tafoya, as always, walks us through that crash, shows us the parts, assesses the damage, and shows us how this car crash is probably the best car crash we could possibly watch.

Watch: The Film Frame Is a Kingdom, The Director Its Ruler

When you create a film, you are simultaneously creating a frame for it, a set of boundaries in which events will unfold. When you do that, you are creating a world–and by extension, you appoint yourself its emperor. The decisions you make about what takes place within a given frame, or how the frame is shaped, or what lies within and outside the frame, cannot help but reflect on the world parallel to the frame, the world in which viewers sit in a theater and watch the film. In this sense, framing, and its exploration, become political. These are the sorts of prescient ideas floating through Chloé Galibert-Laîné’s recent beautiful video essay for Fandor. Taking us through such films as George Miller’s ‘Mad Max: Fury Road,’ Xavier Dolan’s ‘Mommy,’ and Ruben Ostlund’s ‘Force Majeure, Galibert-Laîné shows us what it means to frame something in a film, on a political level as well as, I think, an emotional level. Who says, after all, that emotions and politics aren’t symbiotic? It makes complete sense that Steven Soderbergh, who started with ‘Sex, Lies, and Videotape’ would go on to direct such elaborate productions as ‘Kafka’ or ‘The Knick’: if you look closely at the director’s debut, you discover that it’s a highly determined film, down to its last nail. Shaun Higgins gives the film a very careful look in his most recent video essay (the first of a projected series): the editing, the dialogue, the camera angles, everything, down to the characters’ appreciation of ice tea, are given careful scrutiny here. The film made a remarkably strong impression ion me when I first saw it, and watching this piece has helped me to understand why.

Watch: Michael Mann’s ‘Collateral’ and Sam Mendes’ ‘Skyfall’: How to Build a Scene

For a scene to be truly suspenseful, one must have a sense of the director’s omniscience. What this means is that the viewer must be made to feel on top of, inside, outside, behind, beneath, all over a scene from its beginning to its end, each hairpin plot turn a twist in the viewer’s gut, each moment of respite a breeze on the viewer’s brow. In comparing two key scenes from Michael Mann’s ‘Collateral’ and Sam Mendes’ ‘Skyfall,’ Michael Mclennan shows us how the two directors and cinematographers Dion Beebe and Roger Deakins have placed us inside and outside of the action onscreen simultaneously.

Evan Puschak’s work in his newest ‘Nerdwriter’ installment, on style in Michael Mann’s ‘Heat,’ is fine and detailed. Puschak manages to separate the core of Mann’s L.A. noir tale from the technique Mann adds to it with the precision of someone carving meat away from the bones of a freshly cooked bird. One of the main points the piece makes about Mann’s work is that it is always a blend of what Puschak calls the "functional" and the "stylistic": films that keep you watching through the relentless drive of their stories but have a sleek sheen over them that is unmistakably Mann’s. Puschak has also done his research, pointing out that one of the most famous images from the film, the silhouette shot from behind of DeNiro, looking out into an unbroken blue field (the promo photo for this post, in fact), is actually based on a 1964 painting by Alex Colville called "Pacific"–or that the entire film is based on the true tale of an L.A. detective named Neil McCauley. It’s always a pleasure to revisit Mann’s work, but it’s even more of a pleasure to see it so attentively examined.