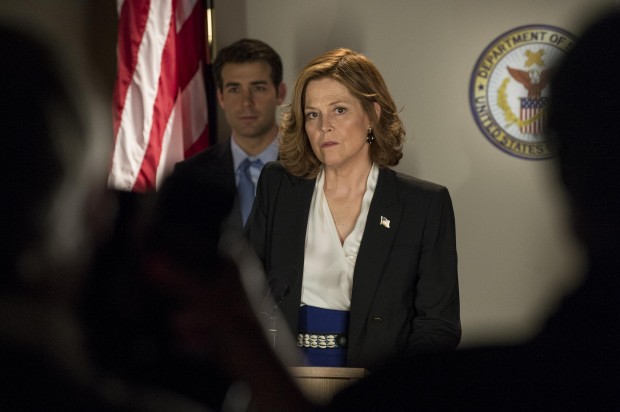 Berg is correct to wear the color of indecision, because she dwells in a twilight world of journalism in which talking about blogs and pageviews is vulgar and one wins a Pulitzer in one’s twenties for covering Southerner Bud Hammond’s Clintonesque infidelities. She has a dangerously high level of access to the Hammonds and has always been the family’s enemy, because she combines the clout of a sterling newspaper and the temerity to say that Elaine is a fool and a bad feminist to have stayed with her philandering husband.

When the show’s pilot aired on Sunday, this seemed like a stretch. If Political Animals is Hillary porn—a revisionist fanfic in which she leaves Bill and runs for president without his greasy hands on her apron strings, or Obama drops Biden to finish the marathon’s last leg with a proven winner—it’s also not a plausible alternate universe. A well-connected Washington friend confirms that, while it’s common scuttlebutt that HIllary will run in 2016 so as to "get a position that's not seen as coming from her relationship with a guy (wife, opponent who lost),” no one in real-life D.C. circles still thinks or cares about Bill Clinton’s infidelities or considers them a hindrance to the career of Hillary, who seems to be doing fine. Also, says my friend, “she'd never leave Bill; she needs him by her side exactly like people like The Good Wife's husband need their wives. It's all a political calculation.”

Then again, the day after the pilot aired, Slate reported, “Protesters threw tomatoes and shoes at Secretary of State Hillary Clinton’s motorcade Sunday during her visit to Egypt. Although a tomato hit an Egyptian official in the face, the armored car carrying Clinton was around the corner from the incident, reports Reuters. Protesters were chanting ‘Monica, Monica,’ in reference to Monica Lewinsky.” It’s a chilling picture. Just as Elaine can’t take a step without hearing that Bud has, in Berg’s exposition-laden phrase, “been linked to TV star Eva Flores,” Hillary may never quite be free of that cursed cigar.

Aside from being a wistful/schadenfreudistic fantasy about the Clintons and a muddled exploration of modern journalistic dilemmas, the show also wants to comment on feminism. In this season of “Why Women Still Can't Have It All,” in which Anne Marie Slaughter’s Atlantic story has brought work-family conflicts back into popular and two-gender discourse, we have two heroines (in purple), torn between professional ambition and personal and moral responsibility.

It looks so far as though Elaine will be okay with further sacrificing her privacy, since there’s probably not much left for the media to uproot. As for risking being perceived as unfeminine, it’s one of the show’s subtextual obsessions; we must continually be reminded that despite her ambition, Elaine is still smokin’ hot, that she has current sex, that she has a soft, motherly heart that just doesn’t show to those cold reporter and pundits.

But Berg, retroactively sheepish author of the book When Bitches Rule, has a residual yearning for traditional things even as she spews unlikely, and probably punishable, sexist abuse at her hot mini-Wonkette younger colleague. Her newspaper-editor boyfriend is cheating on her with said Wonkette, a demonic robot of new media (“My blog hit over one million unique users this month!”), but he’s such a blank-eyed Bil Keane nonentity that there must be another man in store for her. Perhaps the Hammonds’ anxious son Douglas (James Wolk), Elaine’s chief of staff who’s properly engaged to a nice girl? As the Gallant to his brother TJ’s Goofus, so eager to please his parents that he doesn’t notice his fiancee’s bulimia, Douglas is surely destined for some politically inconvenient temptation.

As for Goofus (Sebastian Stan), he seems to have been dropped into this ostensibly stentorian family from an episode of Entourage. He snorts coke, has nightclub-ownership dreams, says “bro” a lot, and gets away with murder. We’re meant to believe he’s just spoiled, but maybe the family is just afraid of what he’ll do if they don’t tolerate his whining, rudeness, and capacity for public embarrassment. That he was the first out gay offspring of a sitting president is meant to excuse his terrible behavior, and his noodling around on the piano demonstrates that he still has a sensitive soul. But the near-stereotype of a damaged, dangerous gay man is a retrograde premise that may entirely negate the show’s purportedly enlightened inclusion of a gay character. TJ may be standing in for the Bush twins, and seems to enjoy as few serious consequences for his manipulative-addict behavior as did Jenna, Barbara, and Bush Jr.

Perhaps appropriately for the perpetually identity-seeking USA network, in a season of far-fetched political promises, Political Animals wants to include a little something for everyone: a fast-paced Middle East story for the 24 junkies, some goofy canoodling for fans of Dave and The American President, the requisite staff backstabbing and wisecracking à la The West Wing, and a touch of Intervention for the rest of us. As a bonus, Ellen Burstyn, as sexy grandma Margaret Barrish, flings outré zingers in the tradition of Maggie Smith in Downton Abbey.

No one could accuse the miniseries of being intimidatingly cerebral or edgy in its gender politics, but, aside from the winking mise-en-scène of the purple outfits, semiotic crumbs seem to be scattered everywhere. Do they merely allude to familiar things —i.e., Barrish is a secret smoker with killer arms, combining both Obamas in one—or are they Agatha Christie–style clues to a sinister subplot we won’t see coming until the finale?

Americans never do quite seem to shake their royalist roots, and Political Animals is ultimately a familiar story of rich people in nice clothes, plotting successions and scandals from a comfortable position of power. Meanwhile, there’s a story here that hasn’t been told to my satisfaction. You know who really can’t shake her legacy? Monica Lewinsky. She’s in a purgatory of perpetual internship and disgrace despite her subsequent education and accomplishments.

I’d like to see a miniseries starring a Lewinsky character, wearing purple, with a political bucket of blood for the prom-queen politicos who left her high and dry. As Barrish explains to Berg, “You’ll never get to the next great moment if you don’t keep going.” When bitches rule, indeed.

Emily Gordon is the online editor of The Washington Spectator and has written the blog Emdashes since 2004. She tweets at @emdashes.