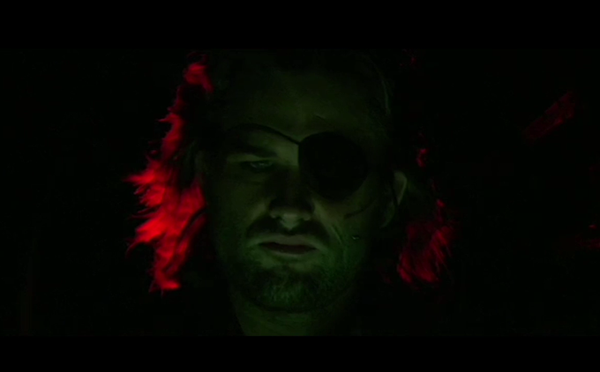 Up until recently, I had a difficult time grasping the cult of John
Carpenter. Out of the small handful of films I had seen from him across
the past decades (‘Halloween,’ ‘The Thing,’ ‘Escape from L.A.,’ and ‘Vampires‘), I found one great film (‘Halloween’), one good film (‘The Thing,’ which felt a bit too much like ‘Alien‘ in Antarctica for me), and two pretty mediocre films (‘Escape from L.A.’ and ‘Vampires’).
Yet, many cinephiles and friends I respect kept urging me to give him a
proper chance. I spent a week or so with about half of his filmography
and I found a director who uses generic pulp for the best of all
possible uses: as a capsule for philosophy and more radical ideology. John Carpenter seems to gravitate towards the subversive, be it in the
form of critiquing American ideology in ‘They Live‘ (1988) or building an action star out of former Disney child actor Kurt Russell with ‘Escape from New York‘ and ‘The Thing’ before destroying that image with the ineffectual man of action—Jack Burton—in ‘Big Trouble in Little China‘ .
What
I found during my journey through his output was not a perfect
filmmaker, but almost always an interesting one.  A film like
Carpenter’s ‘Prince of Darkness‘ is hampered by a low budget
and bloated running time, but it’s overflowing with Lovecraftian
nuggets (the anti-God, psychic television signals from the future) and
surreal images (the bug man, the broadcasts).  Even his director for
hire adaptation of Stephen King’s ‘Christine‘ (1983) features some
of his finest work with actors, finding a real friendship between the
two male leads in one of the worst of King’s novels.  Across all of his
films, there are poetic images, radical ideas, innovative musical
compositions, an idiosyncratic pace, and abrupt shifts in tone (all of
which Nicole Alvarado and I have attempted to capture within our essay)
that define his cinematic voice.  He is, like his hero Howard Hawks, an
auteur.
Dr. Drew Morton is an Assistant Professor of Mass Communication at Texas A&M University-Texarkana.  He the co-editor and co-founder of [in]Transition:
Journal of Videographic Film and Moving Image Studies, the first
peer-reviewed academic journal focused on the visual essay and all of
its forms (co-presented by MediaCommons and Cinema Journal).  [in]Transitionrecently
won an award of distinction in the annual SCMS Anne Friedberg
Innovative Scholarship competition.  His publications have appeared in animation: an interdisciplinary journal, The Black Maria, Flow, In Media Res, Mediascape, Press Play, RogerEbert.com, Senses of Cinema, Studies in Comics, and
a range of academic anthologies.  He is currently completing a
manuscript on the overlap between American blockbuster cinema and comic
book style.

Nicole Alvarado is an animation buff and research analyst.  This is her first video essay.

THEY LIVE MEETS VERTIGO from Chris Mastellone on Vimeo.