Apes vs. Zombies: New Skin for the Old Apocalypse in DAWN OF THE PLANET OF THE APES 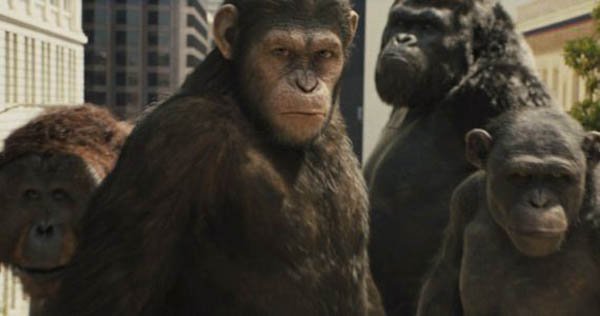 Matt Reeves’ Dawn of
the Planet of the Apes echoes George Romero’s Dawn of the Dead in more than just its title. Both films are concerned
with the end times, and both films explore the nature of what it is to be human by
thinking about the nonhuman.  Both films
are also part of larger franchises, Apes being
the second installment of a reboot that is, astonishingly, superior to any of
its antecedents. Dead, likewise, is the
second installment of a series that would spawn countless imitators, most of them as
mindless as the zombies they portray.
Like the fictional diseases that create them, zombie films are a virus,
and like a virus they need a powerful antibody to destroy them: Dawn of the Planet of the Apes might
just be that antibody.

Many theories have been advanced as to why zombies have
become such a cultural obsession. Though several theories are plausible, I would
suggest that their popularity is largely due to our abiding fear of nature. Not the nature of majestic trees, rolling
hills, and rippling streams, but the nature of
germs, bugs, and putrefaction. The nature we don’t like to think about but that increasingly rules our lives.  Zombie films are essentially about what
happens when the drugs don’t work, when we no longer have a means of controlling
these unmanageable mounds of flesh we call our bodies.  On those rare occasions when they focus in on
this weird biology (as in World War Z)
or on its larger societal impact (as in 28
Days Later), the model of the zombie film can make for surprisingly thoughtful pieces of
horror.  More often, however, the zombie
premise serves as a cheap device that enables a select group of alpha males to act
out their survivalist fantasies.  A
potentially radical premise for exploring what we’re made out of, and what
bodies mean, generates instead an endless mashup of Soldier of Fortune with The
Book of Revelations.

And this is why we need a new take on the old apocalypse.  Anyone who’s paying attention knows that the human species is well nigh fucked, and since our politicians are largely in denial
of this, we depend on artists like filmmakers to tell us stories about the
world we’re soon to be living in.
Science fiction helps us think about the future, and hence it is always
political. You can either tell a story about how people work together to make a
bad situation better, or you can tell about how a few tough guys kick ass.  As the zombie genre seems to have devolved
into the latter, it’s time for a new way of talking about the end.  Enter the ape virus.

Rise of the Planet of
the Apes ended with the spread of a virus that kills humans while making
apes smarter.  Remarkably, this felt less
like an apocalypse than a fresh start.
Humans in that film, with the possible exception of James Franco, are portrayed as sadistic, slippery, and selfish, while apes are
compassionate, candid, and cooperative.  Humans
manipulate nature for their own ends, while apes live in harmony with it.  I can’t think of any other film where you feel like cheering when another species takes over the world.  By comparison with the famous conclusion of the
original Planet of the Apes, with
Charlton Heston venting his anger at the remains of the Statue of Liberty, the
ending of Rise is not so much “Damn
you!” as “Damn, you!” as the audience cheers on our successors to the top of
the food chain.

Dawn of the Planet of
the Apes does its predecessor one better by asking us actually to think
through the moral and philosophical implications of a post-human world.  Rise
offers an escape valve for human excesses that evades broader questions of
culpability, while Dawn suggests that
our limitations as a species are not so easily evaded.  The central moral revelation of Dawn comes when Caesar realizes that his
former belief that apes were better than humans was false, and that the
similarities between the species are as important as the differences.  This revelation is actually a much deeper one
than the hackneyed “Can’t we all just get along” premise, since Dawn is honest enough to recognize that
mutual understanding will inevitably exist alongside mutual loathing.

So the conflict of Dawn
is less between apes and humans than between compassion and
intolerance.  While apes tend to exhibit
more compassion than humans, they hold no more of a monopoly on it than humans do on intolerance.  The good guys
of the picture are those who recognize kinship across the species barrier, the
bad guys those who want to exterminate the "other."  On the human side, the genocidal position is
embodied by Dreyfus (Gary Oldman), who rebuts pleas for mercy toward the apes
by saying “they’re only animals,” and who fights not so much for the survival
as for the supremacy of the human race.
More complex is the character of Koba (Toby Kobbell), a bonobo tortured
for most of his life in a laboratory, and consequently a passionate hater of Homo sapiens.  While it might be argued that hatred is
effectually implanted into this otherwise peaceful creature by inhumane
science, it is also likely that as our nearest evolutionary relations, great apes will share
many of our worst, as well as our best, characteristics.

Like the science of primatology, the rebooted Planet of the Apes franchise looks at
apes as a means to think through the nature of what it is to be human.  Apes tell us where we came from, and thus
they might provide us with some clues as to where we are going.  Judging by the conflicts that emerge in Dawn, the news isn’t good. However, unlike
most zombie films, this apocalypse does provide some meaningful solutions in response to
the humanity’s destructive tendencies.
The most important of these is a message that film is uniquely suited to
delivering: look into the eyes of the other.

An inordinate amount of screen time is given over to
close-ups of Caesar, played with astonishing veracity by Andy Serkis.  What makes this performance so compelling is
that we are never allowed to forget that this is an ape, even as we see
aspects of ourselves in his troubled gaze.
Philosopher and Holocaust survivor Emmanuel Levinas famously argued that
morality begins when we gaze into the face of the other.  For Levinas this meant recognizing the
radical difference of another being as well as the sense of kinship we are
capable of feeling for that being.
Unfortunately, Levinas’ philosophy fell short of embracing other
creatures who might also be said to have faces, dismissing them with the same
disdain as Gary Oldman’s human-centric Dreyfus displays when he says, “They’re only
animals.”

The virtue of Dawn of
the Planet of the Apes is that it gives us an apocalyptic narrative in
which we are asked to confront the other in ourselves, and ourselves in the
other, to look across the species barrier and see something more than just an
animal.  This is essentially what is
lacking in the old zombie apocalypse: when we look in the eyes of a zombie, we
see only decay, or a mockery of our meaty selves.  Gazing into Caesar’s eyes, we see difference
as well as well as kinship, and we realize that our relationship with other
creatures on our planet is a complicated one, and that we might better use our remaining
time in considering the other rather than indulging in fantasies of mutually
assured self-destruction.

And that’s why I say, long live the Ape, the Zombie is dead!