Nobody Gets Out of Life Alive: THE MAN WHO WASN’T THERE 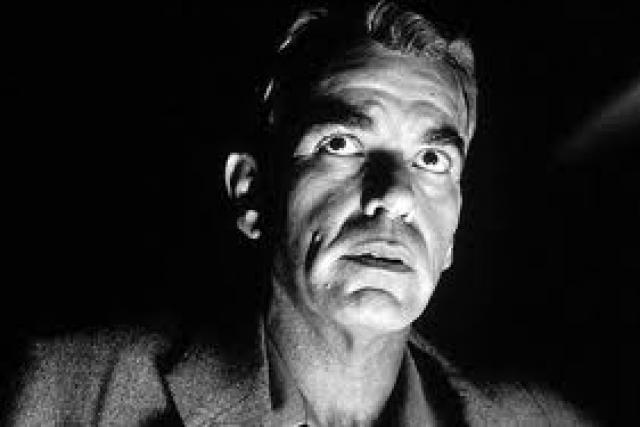 “Nobody gets out of life alive. The world’s so full of
crap a man’s going to get into it sooner or later, whether he’s careful or
not.”–Hud

Originally an advertisement for professional bloodletting
services, the red stripes of barber poles still remain today, despite the fact
that hair is the only thing modern barbers remove from their clients’ bodies.
The Man Who Wasn’t There begins with a languorous opening shot of a spinning
barber’s pole. Since the film is a Coen brothers neo-noir, it’s safe
to assume there will be a different kind of bloodletting before the film
is over.

The year is 1949, and the barber we are about to meet is Ed
Crane, played with a perfectly calibrated laconic calm by Billy Bob Thornton.
He is an existentialist anti-hero, as if Bartleby the Scrivener had chosen an
alternate career path and became tragically enmeshed in a blackmailing scheme
gone wrong.

Ed is an absence punched into the fabric of the film, a
black hole around which it orbits. His primary response to the world is one of
violent underreaction. He is inert with passivity, an American buddha, beatific
with a placid glow of naivete and repression. He’s like an unspoken thought.
This film chronicles his unfortunate late-blooming experiments with taking
action and his resulting demise. The process of his destruction commences the
moment he goes from being an unexpressed thought to an utterance, the moment he enters the world through
activity and decision. And his destruction is also the vehicle by which he
realizes himself.

In the noir cosmos, it is normal for a timid character to be
lured out of a safe but unsatisfying zone of normalcy by mirages of wealth and romance. This is what happens to Ed when
he gets suckered into a swindle that involves becoming a silent partner in a dry
cleaning business. He acquires the money for this by blackmailing his wife’s
boss, with whom she is having an affair. The plan appears to have a perfect
symmetry. He would seem to be able to enter his dream of wealth while getting
revenge against his rival with a single action. He wants to reach goals he has
unthinkingly and hastily stumbled upon in a manner that involves little to no
effort. We know it is not going to end well.

Like many of the Coen brothers’ characters, at no point does
Ed gain an understanding of how he works. The one aspect of his revolt against
his life is his inappropriate attachment to the gamine Birdy, played with a
compelling subdued clarity by Scarlett Johansson. Their
relation is one of genuine friendship, but Ed himself has no idea that his
intentions are also amorous.

This is because he can’t see himself. No learning curve is
possible in this world, only the transformation of circumstances. The rules of
the film’s universe dictate that the ultimate sacrifice must be paid for the
crime of wanting to be a dry cleaner. He mutely picks his moment to enter the
stream of phenomena from the suspended animation of seemingly prosperous, happy
post-WWII America, and he is briskly swept away in the acrid waters of brutal
existential comedy. It isn’t that he is dispatched following a
naively lazy attempt to escape from his life, but that his existence doesn’t
begin until the elaborate process of his undoing has commenced.

Some people find it disturbing that in Coen brothers films,
the characters don’t often have clear realistic referents and appear at first
glance to be stereotypes, playthings created only to be sadistically ground
up in the gears of a machine in which unfortunate patterns of human behavior, bad
decisions, bad luck, and stupidity converge to mete out a punishment so
arbitrary and so astronomically out of proportion to the crime that one can
only laugh. I’ve never understood this objection. Placing doltish,
unrealistically drawn, powerless
characters in an uncertain, comically brutal universe is what the Coen brothers
do best, and it’s what makes their films so entertaining, thought provoking,
and appealing.

The fact that the brothers were faculty brats who went
respectively to NYU and Princeton and sometimes make cartoonish movies about
dim-witted people has led some to the misguided conclusion that they are
condescending to their characters. Dave Kehr, writing about Raising Arizona, opined that “the distinction between satire and sincerity doesn`t mean much to the
Coen brothers, who treat everything that passes before their camera with
the same smarmy condescension…. The elaborate, self-conscious stylistics serve only to proclaim how much
more sophisticated the Coens are than the bumpkins they have chosen to
populate their movie. At the same time, the empty technique invites the
audience to share the Coens` sense of superiority….” Coming to this conclusion requires ignoring the glaringly burlesque fable-like atmosphere that permeates their
films, and falling into the trap of looking in vain for realistic characters
and settings to emotionally identify with, when the films are working with
totally different dynamics and materials. The Coen brothers clearly have a real
affection for their stylistically rendered characters, and this is reinforced by
the degree to which other people love these characters as well. The Coens
create the characters not to be mocked, but to be destroyed with extreme prejudice. The brothers
seem to be poking fun at creations they love. In the process of
humiliating, damaging and annihilating these figures, they render them in an extremely vivid
and often hilarious way.

Though today the Coens are widely critically lauded and
their films are usually discussed in a way that comprehends the spirit in which
they were meant,  their work is still polarizing.
It seems that gleefully subverting conventions never seems to lose its power to
piss people off. Some critics found their first films grating and insincere,
especially critics at the more genteel publications which might not have been
ready for the Coen dynamic, which usually incorporates slapstick, noir, brutal
violence, and wry humor into an entertaining but disorienting mélange. Even the
inordinately perspicacious Pauline Kael held up the first two Coen films beside a template of expectations which rendered them somewhat
illegible to her. On Blood Simple: “[T]he reason the camera whoop-de-do is so noticeable is that there’s
nothing else going on. The movie doesn’t even seem meant to have any
rhythmic flow; the Coens just want us to respond to a bunch of ‘touches’
on routine themes. (These art touches are their jokes.) Blood Simple
comes on as self-mocking, but it has no self to mock.” Critics might be able to accept stylized
wry brutality and black humor, but to be accepted it must be served with a large
side order of transcendence, and that is a dish that is not usually available
on the Coen menu.

When filmmakers don’t
leave clear markers as to how sincere or sarcastic they are, critical anxiety is generated, and this can cause us to miss how much obvious joy is being taken in playing with genres and dynamics.
This has sometimes resulted in a pattern of priggish critical harrumphing that
continues in some quarters even to this day. Rather than letting the sincere
and sarcastic elements work together in a thought-provoking manner as a kind of
essay, the ambiguity is sometimes mistaken for ridicule. Some critics have assumed
that the tradition of realistically drawn, emotionally relatable characters and
settings is being smugly dismissed. After all, it’s the critic’s job to provide
a grading system to determine how well filmmakers provide this traditional
service.

The Man Who Wasn’t There might prove off-putting if
approached with this conventional set of expectations. But it’s funny,
thought-provoking, and mesmerizing if you let its themes and questions, and its
gorgeous, silky black-and-white cinematography work more in the spirit in which
they seem to have been created: as a wry, poetic thought experiment within a
technically impressive formal genre structure. The Man Who Wasn’t There offers
the stability of being one genre rather than several at the same time, but it
doesn’t offer a stable railing of seeming emotional truth. It works by keeping
the viewer continually off balance, so the only stability is to be found by
continuing to ask questions.

The Coen brothers’ warmer, more wildly entertaining films
like Raising Arizona, The Big Lebowski, and Fargo do provide opportunities for
the traditional dynamic of emotional identification. But even their sweetest
and most uproarious films also contain their trademark opposite pole of
punishing nastiness. Allowing these contradictory polarities to work
simultaneously to some degree is a large part of what gives their films a
unique sense of tension and unpredictability.

There are many things that critics agree the Coens do well,
including themes of friendship, theatrically arresting violence,
humor, suspense, elaborately complex, perfectly choreographed set
pieces, perfectionist music editing and overall technical panache. Not least
among the things they’re known for is unforgettable dialogue, often done with
in a comically inappropriate literary style. They’re fond of voiceovers,
usually from unreliable narrators such as H.I. in Raising Arizona. Their films
use a contrast between the narrators’ blinkered perspective and the
considerably broader perspective accorded to the camera. The voiceovers are
dramatic monologues competing with the images rather than explaining them. Ed’s
voiceover in The Man Who Wasn’t There is eventually revealed to be a men’s
magazine article about his journey to the electric chair. It is, literally, an essay.

The movie begins with Ed talking about how little he talks.
“I just cut the hair.” Disparities between subjective narratives and
the gaps of knowledge between characters fuel some of the tensest scenes of
conversation in the film, as when Ed is first speaking to the menacing Big Dave Brewster,
played by James
Gandolfini, with his trademark Tony Soprano blend of menace and
affability. We are not sure how much Big Dave knows or what he’s capable of, as
he is speaking to Ed as though in confidence about some other blackmailer. He
slowly reveals how much he does know, which is everything, and then asks him in
mounting rage, “What kind of man are you?” before attempting to beat
him to death. Ed semi-accidentally kills him in self-defense with a lucky jab
of Big Dave’s cigar cutting knife straight into the jugular. The shot of Ed
being strangled by Big Dave is done from outside the room, behind glass he is
being pressed against. The glass, our view of the scene,  cracks joltingly during the struggle, and
this marks the first start of the machine of Ed’s fate. The scene
ends with the ticking of a clock.

Not all the verbal narratives in the film are unreliable.
The Coens are not nihilists. Several pieces of information are framed as if they were
objectively the case. The first comes from Ed’s lawyer’s private detective, who
reveals that Big Joe was faking his war hero resume. He turns out to have been
just a bar room brawler with an anger management problem. The other comes from
the piano tutor Ed contacts to evaluate Birdy’s level of talent, and whose evaluation is unusually
frank. Neither piece of truthful information is particularly important in the
film.

The film’s basic dynamic involves simple reversal of the passive
and the active. Instead of shaving his wife’s legs for her and cutting other
people’s hair, at the end of the movie Ed is the one being shaved, with
orderlies scraping away the hair on his leg to ensure a good contact for the electric chair. He is not even being
executed for any crime he committed, but he doesn’t mind. He’s in the driver’s
seat.

Drew Gardner’s books include Chomp Away (Combo, 2010), and Petroleum
Hat (Roof Books, 2005). He tweets at @chompaway and lives in New York
City.