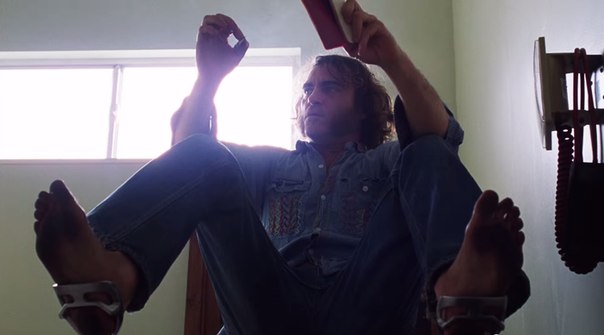 Throughout
his career, Paul Thomas Anderson has focused on human vulnerability. Films from
Punch Drunk Love to Magnolia to The Master to Inherent Vice to There Will Be Blood portray love as equal parts tender and strange. The
protagonists of Anderson’s films struggle with a range of
vices, from drug and sexual addiction, to anxiety and depression, to megalomania,
to gambling, to rage, to straight-up greed.

Anderson
uses vice as a way to explore different dimensions of human sadness. Each hero
is promised some kinds of greatness—Barry Egan wants to achieve success by collecting
frequent flyer miles from pudding box tops in Punch Drunk Love. Dirk Diggler hopes to keep up his fame and
recognition by virtue of his enormous package in Boogie Nights. Troubled Freddie Quell hopes to find both freedom
and family when he meets his mentor, the cult leader Lancaster Dodd, in The Master.

I was
first introduced to the world of P.T., as I affectionately called him, when I
watched Boogie Nights in a dingy
college dorm room, my sophomore year. There was a painting of an ocean on the
wall and a bottle of melatonin on the dresser, a tiny hand-me-down television
we borrowed from a friend that still played VHS tapes. At the time I spent full
days writing poems and songs and learning to be an artist and a writer. I was
smart, but I often didn’t live up to my potential and I wasn’t a particularly
good student. I have many good memories, but I have a lot of sad ones too. I
struggled throughout college with an eating disorder, I often had a strained
relationship with my parents, I rushed headfirst into a relationship that
taught me everything there is to appreciate about young love, and everything
there is to be wary of too.

In my
last year of college I’d walk past the elementary school at about noon every
day, on my way home from getting out of morning classes, and I’d see a sea of
children playing just over the horizon. My painful memories from college seem
blurry and imprecise, but images like these remain clear. At the time I didn’t
know it, but moments like these were slowly carving out my heart into the shape
it was meant to be.

Perhaps
P.T. Anderson strikes such an emotional cord in me because I discovered him at
a time when I was first learning to push back against cynicism. The truth may burn in a P.T. Anderson film, but even when it
does, we learn not to regret the scar. The
worlds that he explores are darkly sensual, hardboiled and masculine, but
softness and light always seem to linger somewhere in the periphery: sunlight
arching over an oil rig, a harmonium found next to a warehouse. We focus on tear-filled
faces throughout Magnolia, but the
final shot was still a close-up of a crying woman’s smile.–Arielle Bernstein

Arielle Bernstein is
a writer living in Washington, DC. She teaches writing at American
University and also freelances. Her work has been published in The
Millions, The Rumpus, St. Petersburg Review and The Ilanot Review. She
has been listed four times as a finalist in Glimmer Train short story
contests. She is currently writing her first book.

Nelson Carvajal is an independent digital filmmaker, writer and
content creator based out of Chicago, Illinois. His digital short films
usually contain appropriated content and have screened at such venues as
the London Underground Film Festival. Carvajal runs a blog called FREE CINEMA NOW which
boasts the tagline: "Liberating Independent Film And Video From A
Prehistoric Value System." You can follow Nelson on Twitter here.

One thought on “Watch: The Inherent Vice in Paul Thomas Anderson’s Films: A Video Essay”