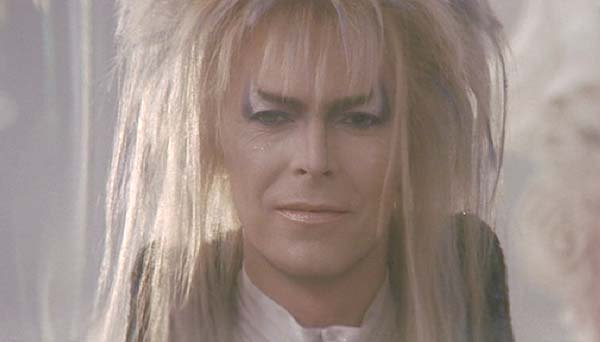 Seeing David Bowie appear in a film is always a vaguely unsettling experience, and Drew Morton’s video essay about the musician’s movie work takes us on a transfixing tour of that experience, inside and out. Bowie’s presence on camera is shaped as much by his carriage as by what we know about him. It can be said without too much exaggeration or nostalgia-laden reputation inflation that Bowie is one of the more original and enigmatic figures to record rock music in the last 50 years–he has cultivated an unearthly quality and perspective in his work practically from its outset. (There’s a reason "Space Oddity" was performed on the ISS, after all.) And in films, he projects an aura that does make it seem, at times, as if he had been teleported into the film from … elsewhere, to inject a factor of unpredictability into the work and, possibly, to stir recognition in older viewers, giving the film they’re watching a certain boost in credibility with a pop-culture wink. In the older films, like Labyrinth or The Man Who Fell to Earth or The Hunger, Bowie’s exotic, vaguely androgynous quality is all we see: his rock heritage is worn on his sleeve and empowers his performance. In the more recent The Prestige, Bowie’s performance was more buttoned-up as he played Nicola Tesla, but at the same time, the casting choice made perfect sense. Who better to play someone with as wild and untamed an imagination as Tesla’s than Bowie, the man who once dressed himself up as Ziggy Stardust, a man who communed with aliens? As Bowie’s musical career continues to develop, watching him in films like the ones sampled here should help to give well-deserved breadth to his accomplishments.