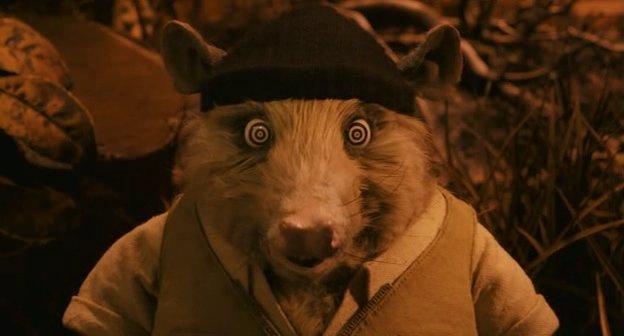 Is Wes Anderson influenced by Federico Fellini? Yes. Inasmuch, of course, as any American film director of the past 50 years might have been influenced by him. Fellini, Ingmar Bergman, Francois Truffaut, Jean-Luc Godard and others opened up a possibility for expansiveness and experiment in cinematic storytelling in the mid-years of the twentieth century that is as irreplaceable as it is hard to dispute. As this haunting piece by Andrew Infante shows, there’s a lot of similarity to note here, whether it’s the vaguely dreamlike way events occur in Anderson’s films, external logic giving way, beneath the surface, to something darker and stranger, or the lack of context for so many of the images and scenarios Anderson presents, from the garish outfit Max Fischer wears onstage in Rushmore to the strange silence of the hawk in Fantastic Mr. Fox and onwards. There’s also a sense of nostalgia, of looking backwards, in Anderson’s films that very much recalls Fellini classics like Amarcord or Juliette of the Spirits–in which the sense we get is not so much that the past was better, but that it was richer, even if that richness included equal parts suffering, temptation, and ecstasy. And is there decadence in Anderson’s films that rivals that shown in Fellini’s work? Yes. The older director filmed it: the parties, the orgies, the makeup, the wealth. Anderson embraces the same spirit, but works towards allowing his own imagination, the cult of one in which his vision is the founder and the sole acolyte, to steer his films. You could say "self-indulgent," but that’s not quite it: it’s a career in which, rather than killing his darlings, Anderson has multiplied them, magnified them and built them up to show the world the great benefit which has been reaped by keeping them alive.