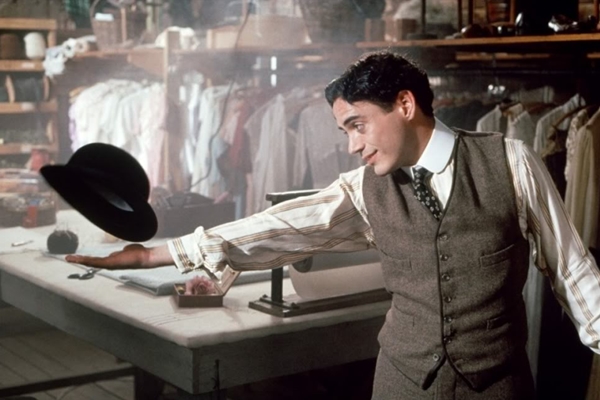 The scary doll, or puppet, or dummy, is, by now, a cliché of horror: films from
the Chucky movies to Poltergeist have
availed themselves of it, to the increasingly begrudging fright of their
viewers. For many (though not as many as there should be), the scary puppet
motif began (and possibly ended) with the 1978 film Magic, directed by Richard Attenborough, who passed away in late
August. The actor and director whom most would know either for his turn in Jurassic Park or for directing vast
films like Gandhi or Chaplin had other exploits up his sleeve
as well: an early film role was Pinkie in Brighton Rock, a movie about violence and terror on the English seaside birthed from
the fog-swept, crime-obsessed mind of Graham Greene. What’s most evident, in
watching Attenborough’s films and considering his career, is a sense of embodiment, of
polymathy. On the most basic level, this could mean he was able to act and direct
with equal ability. To play Pinkie as a young man and then play Santa Claus (in Miracle on 34th Street)
or a deranged scientist late in life suggests, at the very least, range, but it
also indicates that he possessed the kind of intelligence invaluable to successful
actors: the ability to imagine someone you have never met, and then
someone else, and then someone else, and never let anyone see the workings of your imagination. Carvajal’s fluid, deft piece shows us both sides of
this man, the acting side and the directing side–and reminds us of the great consciousness Attenborough obviously had of his audience. It is strange to remind one’s
self, when witnessing the expansiveness of a film like A Chorus Line, in which the only way to tell the story is to go
large, as large as possible, that the maker of these films also made a movie as
creepy and all-out frightening as Magic,
which captured the flitting, nervous intensity of Anthony Hopkins in his younger
days and, as with many movies of this period, put very little between the viewer
and the events unfolding on screen: there was little subterfuge, little music,
even, just the pure fright of what was unfolding. The phenomenon of the
actor-director is an old one, going back to Charlie Chaplin himself, or farther. It’s rare, though,
that an individual pulls off great success in both in one lifetime. The
projects an actor directs might take on the sheen of a “private project,” like
the films of Tim Roth or Ethan Hawke, or they might assume a stature separate
from their director’s reputation, like those of Sean Penn, in recent times, or,
in a different sense, Woody Allen. Although these shape-shifters do something
slightly different things with what might call their powers, the source is
clear: immersion in a discipline, which is, in this case, film. RIP Richard
Attenborough.—Max Winter

Nelson Carvajal is an independent digital filmmaker, writer and content
creator based out of Chicago, Illinois. His digital short films usually
contain appropriated content and have screened at such venues as the London Underground Film Festival. Carvajal runs a blog called FREE CINEMA NOW
which boasts the tagline: "Liberating Independent Film And Video From A
Prehistoric Value System." You can follow Nelson on Twitter here.