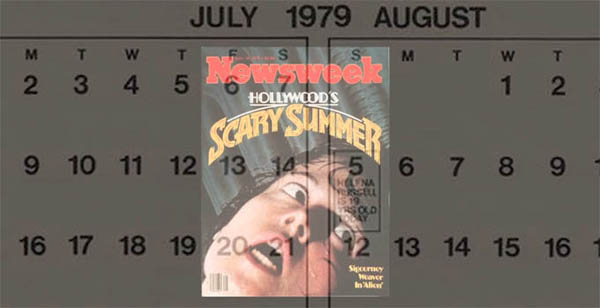 The cover of the June 1979 issue
of Newsweek featured an image of
Sigourney Weaver from Alien. The
caption read: "Hollywood’s Scary Summer." I was thirteen. The horror movies
released that summer would form a grotesque
carnival that mirrored my own and the world’s anxieties.  Earlier in the
spring there was the disastrous nuclear accident at Three Mile Island. That summer, major oil spills polluted the Gulf of Mexico
and the North Atlantic Ocean. This year, oil prices doubled, Margaret Thatcher
was elected, and the Ayatollah Khomeini rose to power.   I slowly came
into awareness of the political and environmental degradation around me that
year. The films I watched reflected that, as well as my own thirteen-year-old desires
and fears .

As tag-lines go, George Romero’s Dawn of the Dead sports a pretty good one: “When there’s no more
room in Hell, the dead will walk the earth.” I stared for weeks at the lurid
poster bearing these ominous words. It hung in the front windows of the
Maplewood Mall multiplex.  Looking back,
I think a more fitting tag-line might have come from a speech given by President
Jimmy Carter later that same summer: “Often you see paralysis and stagnation
and drift.  What can we do?”

Carter was addressing what he described as a “crisis of
confidence” in America. His July 15, 1979 address has been called “the malaise
speech” for its focus on the country’s financial woes and lack of
direction.  Like Romero’s film, the
speech offered a disturbing vision. It showed a world drained of vitality and
meaning.

What better setting for such a vision than a mall, where the
film’s protagonists hide out to weather the zombie apocalypse?  And what better place for me to have seen
this film, in the mall where I was to spend so many pointless afternoons,
wandering the aisles and riding the escalators like Romero’s zombies?

1979 was also the year when my family decided we needed
solutions to our own paralysis and stagnation. We sought it through family
therapy, proudly airing our co-dependencies and dysfunctions, along with many
other American families caught up in the family therapy movement.

Few films expose the limitations of therapy narratives more
ruthlessly than David Cronenberg’s The
Brood.  Cronenberg explored the
psychosexual demons haunting the individual human psyche in Shivers and Rabid. He then anatomized the late-70s zeitgeist by turning his attention
to the monsters lurking within the fractured family.

The poster advertising John Frankenheimer’s Prophecy featured a grotesque image of a
monstrous fetal creature wrapped in its placenta. I responded to this image with
equal parts fascination and horror.  After
seeing the film, however, I discovered that horror could help me to make sense
of the era’s toxic events.  With Prophecy, Frankenheimer wanted to create
an environmentally-conscious horror film that would raise the ethical stakes of
popcorn fare.  It can hardly be said that
he succeeded in this goal—the director has blamed his own alcoholism at the
time, as well as production issues, for the film’s relative failure. However,
the film did succeed in presenting images and settings that managed to distill the
toxic environments of the 1970s, at least for one young filmgoer.

Star Wars was
predicated on an escapist premise that used science fiction conventions to
blast us into a galaxy far, far away. In the universe of Alien, on the other hand, space
is confined, claustrophobic.  It is a
universe very much like our own, subject to the laws of supply and demand.  As we watch a complex mass of space-borne
metal slide slowly across the screen, a superimposed text tells us this is the
commercial towing spaceship Nostromo. The
ship is hauling a refinery and twenty million tons of mineral ore.  Space, the final frontier, has become, like
all frontiers, a resource to be exploited.

Although I wasn’t yet old enough to have a driver’s license,
like everyone in 1979 I was highly conscious of rising gas prices and their
effects.  I watched those daily images of
gas station lines so long they looked like shanty towns with a grim fascination.
They closely resembled the conjoined images of excess and destitution common to
those post-apocalyptic films I loved from that era. Films like The Omega Man, Damnation Alley, and Soylent
Green seemed half in love with the world’s death.  What did the earth that the Nostromo’s crew
were trying to return to actually look like?
Probably something much like the one depicted in these films. The images
I watched on the nightly news seemed to be offering a disturbing preview of
that world.

Nelson Carvajal is an independent digital filmmaker, writer and content
creator based out of Chicago, Illinois. His digital short films usually
contain appropriated content and have screened at such venues as the London Underground Film Festival. Carvajal runs a blog called FREE CINEMA NOW
which boasts the tagline: "Liberating Independent Film And Video From A
Prehistoric Value System." You can follow Nelson on Twitter here.