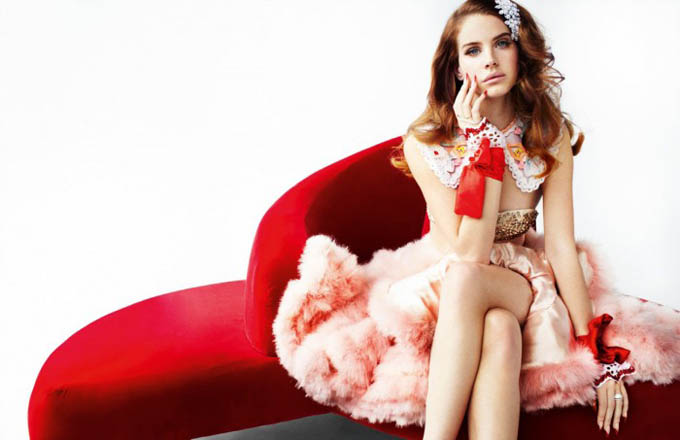 Lana Del Rey’s latest album, Ultraviolence, is filled with hazy and seductive contradictions,
affirming the glamour and seduction of old Hollywood icons, femme fatales with
Veronica Lake waves, and mobster wives with baby voices. Del Rey is certainly
not the only female singer to be drawn to these motifs.  But the worldview that Del Rey constructs is
not Beyonce’s sepia-hued “Why Don’t You Love Me?”, where Queen Bey playfully
dismantles the image of the 1950s housewife.

Nor is it Madonna’s
wink to Marilyn Monroe in her video for “Material Girl.”

Del Rey isn’t
interested in reclaiming the figure of the housewife or movie star. In fact she
takes her feminine icons very seriously.
Her video for "Shades of Cool," for example, has echoes of Marilyn Monroe’s
famous pool scene in “Something’s Got to Give,” and in “Brooklyn Baby” she
references her in lyrics, based on some of Monroe’s famous diary entries where
she wonders why no one takes her seriously.

The world of Ultraviolence is filled with reverence for a
rock-and-roll lifestyle that many feel has already come and gone, but that Del
Rey clearly appreciates for more than the sake of nostalgia. In interviews she
has explained that her songs are mostly autobiographical, plucked from times in
her life when she has felt most lost, and also the times, generally in the arms
of a lover, when she has felt most genuinely free.

One of the main reasons that Del Rey has been maligned has to
do with the fact that she is an artist who is more interested in the masks we
wear than in being a “strong female role model.” Critics of Del Rey have long
denied her authenticity (her records under her given name, Lizzy Grant, looked
and felt intrinsically different than her first album as LDR, Born To Die) as well as her agency. Del
Rey has historically been seen as a pawn of record executives, or, even worse,
as a figure that is merely empty and submissive. Pitchfork called Born To Die the “equivalent of a faked orgasm” and critics like Ann Powers
lamented that Del Rey represented “the worst parts of being a girl.”

For a woman to be perceived as “submissive” or “docile” is
the ultimate feminist insult, even though these words are often strangely
unspecific, related to being gentle, soft-spoken, quiet, or even just being
disarmingly pretty, or liking or wanting male attention. Songs demanding better
treatment and female empowerment existed before the girl power anthems I grew
up on in the late 90s and early 2000s.  In
the 60s, Aretha Franklin demanded respect . . .

. . . and Carole King and
Joni Mitchell urged us to listen to women’s stories; artists from Madonna,
Beyonce, Christina Aguilera, TLC to Lil Kim, Missy Elliott, and Nicki Minaj
often explicitly sing about double standards in the music industry and in the
bedroom. While they all define it in a different way, each artist explicitly
urges women to seek empowerment above all else.

Del Rey doesn’t play into this script. Catherine Vigier,
whose essay The Meaning of Lana Del Rey is
often discussed when pop culture critics lament the influence of Del Rey on the
Millennial generation, claims that one of the reasons Del Rey is so controversial
is that she is a woman who is clear that she doesn’t know what she wants, in a
world where feminists argue that knowing what you want is the ultimate and
definitive feminist act.

But is Del Rey’s desire to play with the many masks she is
given inherently anti-woman? In recent interviews Del Rey has made it clear
that she is less interested in talking about feminism than space, a quote that,
like many of Del Rey’s quotes, could lead to a thousand different interpretations.
In truth, Del Rey’s influences are mostly moody depressives, icons like Kurt
Cobain, whose vulnerability was read as “sensitive,” rather than “vacant.”

Unlike many current female artists, like Lily Allen, and
popular comedians, like Amy Schumer, whose social commentary is laid thick with
sarcasm, there is something about Del Rey that is disturbingly earnest.

Her constant need for
sex is more akin to The Rolling Stones’ howl for “Satisfaction” than Samantha’s
need to get laid on Sex and the City.

Del Rey is closer to a character in a Mary Gaitskill
collection: she is a submissive, like many of Gaitskill’s narrators, who seek
out fantasies and are ultimately calling all the shots, rather than an empty
headed, meek ingénue like Anastasia in Fifty
Shades of Grey.

Though some insist that Del Rey’s nostalgic styles are
inherently anti-feminist, female sexuality in pre-code and even post-code
Hollywood,was, in reality, filled with saucy, sexually assertive women, vixens
and femme fatales who played up their sexual charms joyfully—Barbara Stanwyck,
Marlene Dietrich, Greta Garbo, Josephine Baker, as well as the ever delightful
Mae West.

Playful banter remained a mainstay in classic Hollywood
cinema, where female wit was both smart and playful, a way to reel a guy in or
keep the men at bay. Heterosexual banter often sizzled on screen because it
managed to highlight sexual tension between equals.

Del Rey is certainly more Marilyn Monroe than Mae West, but
her self-described “gangster Nancy Sinatra” image is also one that is much more
about the female gaze than the male one. Del Rey is obsessed with the way women look at men, about
the desire to be desired. In the video for “Blue Jeans”, for example, we watch
Del Rey watching her lover undress, her face sinking into pure pleasure as he
gently slides his fingers into her mouth.

In her video for
“Ride,” Del Rey is in constant pursuit of pleasure, her little red sneakers
walking tentatively on pavement, her hands thrown back in the air, while riding
on the back of a motorcycle.

If she lives for the
men she loves, as many criticize, it is also those men who are cheering for her
in the spotlight. Is the desire for male attention inherently anti-feminist,
as some theorists claim? For men like The Fonz on Happy Days, The Situation on The
Jersey Shore, and Barney Stinson on How
I Met Your Mother, their entire sense of identity is based on their ability
to pick up chicks. Indeed, the same is
true in many commercials. Take, for instance, the Axe body spray commercial,
predicated on the idea that male power is derived from the ability to score
with a hottie.

When men alter their
body hair, douse themselves in cologne and use “pick-up artist” techniques,
they are seen as active, free agents, in charge of their own destiny, but when
women like Del Rey paint their nails, don pretty dresses and talk about boys
they want to love, they are dismissed by many men and women as being
empty-headed and unserious.

The Bechdel test, the idea that female characters in a movie
should have at least one scene where they are talk to one another about
something other than a male romantic interest, is often cited as a means of
figuring out whether female characters are allowed true agency. If one uses
this test as a guideline for romantic and sexual obsession for heterosexual
women, it automatically reduces the complexity of their characters. This idea
plays itself out all the time, especially in films targeting teenagers. Male
teen lust is portrayed as natural, and learning to approach women is seen as a
way that young men can build their identity. In contrast, teenage girls and
young women who are interested in romance are often portrayed as foolish,
unintelligent, or “boy-crazy”.

For all her sauciness, Mae West would have failed the
Bechdel test. Throughout her self-made career she was often portrayed as the
single female being admired by a gaggle of men eager for her affection and
approval. She is obsessed with
seeing herself as an object of great desire, which she doesn’t see as being
antithetical to being seen as an individual who can get whatever she wants with
her fiery wit and her insistence on being taken seriously.

Del Rey insists on a different kind of seriousness: she
really wants her despair to be seen as human, for her conflicted desires to
reach the same level of gravitas that we afford male leads. One of her favorite
icons, Marilyn Monroe, wanted the same thing: to be taken seriously for her
intelligence, for her viewers to look beyond the mask—that baby voice, that
golden coifed hair—and see the person underneath the artifice.

Unlike Monroe, whose desire to be seen for her humanity over
her status as “sex icon”, went largely unrecognized in the era she lived, Del
Rey’s status in a post-third wave feminist world is constantly discussed. But perhaps Del Rey’s image is charged
precisely because viewers haven’t changed as much as we think we have since the
40s and the 50s, when a post Hays code world supplied a crib sheet for what
desirability looked and sounded like. In her article, “Pretty When You Cry,”
for Pitchfork, Lindsay Zoladz claims there is in fact something subversive
about Del Rey’s insistence on sadness, her refusal to wear a happy face; in a
world where people often demand female exuberance, Del Rey refuses to placate
audiences with a smile and a wink.

While I grew up on the angry rock anthems
of artists like Fiona Apple, Tori Amos and Alanis Morrissette, I also take Del
Rey seriously when she says she doesn’t find feminism particularly interesting.
Despite how drenched in femininity her persona is, Del Rey is much more
interested in being an icon, period, than a female icon, and her gritty image
on Ultraviolence is all about
swagger. In “Ultraviolence” she croons The Crystals’ uncomfortable lyrics, “He
hit me and it felt like a kiss,” and sounds like a breathy Bill Withers
beckoning a lover, “If it feels this good being used / you just keep on using
me / until you use me up.” In this same song she also references the
novel Lolita, which Del Rey has often
cited as a source for inspiration.

In the end, Lana Del Rey could care less about your girl
power anthems and political charges. Ultraviolence
is about the contradictions in the human experience—lust and sadness and
existential need and desires that don’t have easy answers and won’t be fixed
with better public policies. The world of
Ultraviolence is important not because it necessarily has specific
political aims, but because it is about the messiness of the human experience
and how, no matter how many power ballads we write, true satisfaction, for men
and women, is still often mysteriously elusive.

Arielle Bernstein is
a writer living in Washington, DC. She teaches writing at American
University and also freelances. Her work has been published in The
Millions, The Rumpus, St. Petersburg Review and The Ilanot Review. She
has been listed four times as a finalist in Glimmer Train short story
contests. She is currently writing her first book.

***A special thanks to Serena Bramble for the Monroe/West/Bacall and Knowles/Mitchell/Dietrich medleys posted above!***