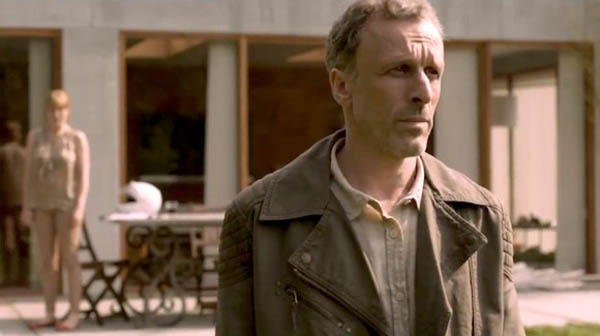 The following contains spoilers, of a sort.

If you were a novelist, or a filmmaker, or a playwright, or
even a scholar, or a critic, and you wanted a primer on how a story might be put
together, you would need to look no further than Alex van Warmerdam’s Borgman. No, it wouldn’t teach you that all stories should contain
humanoids who may or may not come from another planet, or that all stories
should feature disembowelment or, beyond that, social critique. It could,
however, teach you how to start a story, how to make it interesting, and how to
end it. The film, which tells the story of a man’s intrusion and destruction of
a harmonious home, has many wonderful attributes: a strong, mercurial
performance by Jan Bivjoet as the title character, coupled with an empathetic performance
by Hadewych Minis as his onetime love interest, now a comfortably married suburban wife and
mother; a gorgeous sense of stillness in its tableaux, often shot from a
distance, so we look both harder and less attentively at the on-screen events;
a remarkable sense of pacing; and above all, an enticing, pervasive spirit of surrealism. But its structure is its most enduring element.

The film begins, persuasively, with a mystifying sequence, intended solely to raise questions in the viewer’s mind. Several men march, in a dogged
group, into a deep forest with weapons; there is a priest among them, and even
the priest is armed. At a certain spot, they stop, and they begin driving poles
into the ground. It so happens that they are poking into the underground home
of Camiel Borgman, the film’s questionable protagonist. He vacates his well-appointed
grotto immediately at the first sign of siege. He escapes quickly and finds his
comrades, all of whom are sleeping in what seem to be pods just underneath the
leaf-covered ground. Who are these men? Why do they live this way? Why are the
other men seeking them out? Have they done something wrong? Are they dangerous?
The film raises these questions and then, smartly, changes course.

A sudden shift in perspective is a common technique in
storytelling; films as varied as The
Crying Game, Down By Law, or Mulholland Dr. all make sudden leaps,
the immediate effect being disorientation, the culminating effect being a sense
that a larger world tableau has been examined than might have been expected at
the film’s outset. Here, the shift is to a traditional stage for plot-making:
the happy home. That home, in this case, is a vast house in the suburbs, owned
by Richard, an entertainment executive, and his wife Marina, an artist. They have three children
and a live-in nanny. Into their lives comes shaggy Camiel, claiming both that he
hasn’t bathed in days (probably true, from his bedraggled appearance) and that
he knows Marina, that in fact she was his nurse at one point. Camiel is soon
stealthily ensconced in the family’s life, without Richard’s
knowledge—which means their happiness is about to be disrupted. From the time
of Paradise Lost forward,
storytelling demands that if a situation does not have any readily apparent
problems, its surface must be disrupted. Otherwise, there is no story. In this
case, the disruption is immediate. When Richard first meets Camiel, he beats him
for making inappropriate comments about his wife—and then he and Marina
fight. Marina sneakily finds Camiel a spot in a guest house on their rambling property. Not long after
that, we see Camiel, naked, crouched on top of Marina’s naked, sleeping body, disturbing
her dreams. And not long after that, Camiel kills the family gardener: one
disruption on top of another. Here, van Warmerdam deploys yet another standard
storytelling technique: the use of a crystal-clear, memorable image which
encapsulates all that happens within a story. When Camiel, along with two
be-suited associates (we never find out how these malevolent figures are connected),
kills the gardener, he also kills the gardener’s wife. The way in which he
disposes of their bodies tells us quite a bit about what the film is trying to
do, and elegantly: the victims’ heads are buried in buckets of concrete and they
are tossed to the bottom of a lake. We watch the bodies descend, slowly,
gradually coming to rest with their legs pointing directly upwards and their head
pointing directly downwards: they are turned upside down, just as the lives of
those above them are, increasingly, turned upside down and cast into disorder.

Here the narrative once again doubles upon itself, as if to
demonstrate to a viewer the extents to which stories must go to reach their
desired destinations—and also to show that within one narrative, constant
revolution may sometimes be necessary to keep it alive. In this story, Camiel
bathes, gets himself a haircut, and shows up once again at the family’s door,
this time in an interview for the gardener’s replacement. Richard, not
realizing that he is talking to the vagrant he pummeled earlier, likes him and gives
him quarters in the house itself. Shortly after his arrival, Camiel marshals a
tractor to tear up the garden, ostensibly in an effort to improve its
appearance—but, of course, also tearing up all the family has cultivated, all
of its peace, here embodied in the carefully landscaped trees. We learn,
gradually, that Camiel and Marina do indeed have a history; she reaches out to
him, and he does not reach back until a stage, of a sort, has been set. The
setting of that stage is gruesome, involving murder, drugging the children,
and, once again, Camiel’s invasion of the family’s dreams. From this point
forward, everything that van Warmerdam has put in place moves quite smoothly towards a neat (and perhaps all-too-neat).

For all of its structure, the actual conflict in the story
arises primarily from the alien quality of Camiel’s presence. The question of
what his purpose is in the film rises with beautiful restraint, until finally
he achieves his objective—at which point the film ends. Borgman has been chided
for not providing enough answers to the questions it raises—which may be fair,
given that if those answers were provided, the emotional weight of the film might
increase. For a film of this type, though, the questions are more significant
than any answer the director might provide. Indeed, the absence of such answers
helps to accentuate the film’s ultimate accomplishment, which is to show the
shapes madness and anarchy may take when properly contained—and how every story
is, in a sense, like the house described here, a box with four walls and a
roof, in which nightmares and daily realities compete for our attention.

One thought on “How BORGMAN Makes an Ideal Storytelling Lesson”