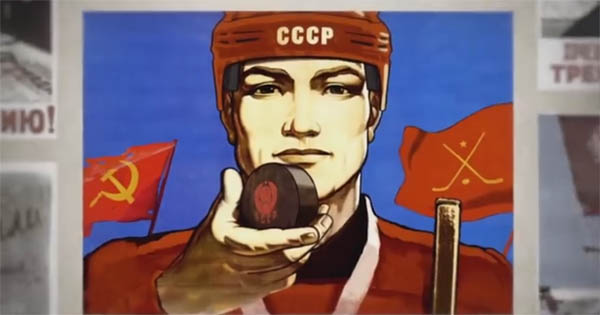 Sport is nothing if not a battle
of ideologies. The West Coast offense versus the Option. Tradition versus sabermetrics.
Defense wins championships. In the Cold War era, international sport provided a
unique look into all manners of ideology, from citizens’ approach to sport to
the all-encompassing Communism versus Social Democracy debate. From Olympic
boycotts to defections to Rocky IV,
sport provided a venue for discussion of larger issues of ideology through the
microcosm of its very nature and metaphor. Nowhere was this more evident than
in hockey.

As a Canadian, I was taught the
greatest hockey team of all-time was the 1972 Team Canada that beat the Soviets
at the Summit Series. Paul Henderson’s series-clinching goal had as much
magnitude as our national anthem. Similar arguments were made of the 1987
Canada Cup team that boasted both Wayne Gretzky and Mario Lemieux. That’s the
greatest hockey I’ve ever seen, or likely ever will see.

For Americans, I imagine a
similar argument could be made for the 1980 Miracle on Ice in Lake Placid
(they’d be wrong, but my nationalist bias causes me to digress), if not for the
team then for the virtue of its victory. But history is born of nationalism,
written not so much by the victors, as Winston Churchill suggested, but rather by
those with a medium with which to argue who was the greatest, who were the
heroes, the villains, and indeed the victors. Filmmaker Gabe Polsky’s upcoming documentary
Red Army “tells the story of the most
dominant sports team in history: the Soviet Union’s Red Army ice hockey
team.”

Polsky is the son of
Russian-Ukrainian immigrants, and grew up in Chicago. He played hockey at Yale.
I don’t for a second doubt his credentials as a hockey documentarian (even though my Canadian
passport demands I should) nor his affection for his subject matter (it is
infectious). But my immediate reaction, as a Canadian, as a hockey fan, to the
above quote from the film’s production company was: I’ve got a whole country
that disagrees with you. However, I will admit, Polsky’s argument is
compelling. And according to its director, Red
Army is about more than hockey. It’s about an era. It’s about the rise and
fall of an ideology, and the end of the Cold War.

While North American hockey was,
and is, built around stars, the Red Army team was more interested in the
collective. As Polsky says, “A lot of Soviet ideology ended up in sport. They
didn’t emphasize the individual.” This shouldn’t be that much of a surprise, as
the Red Army team was the international face of a communist dictatorship. They
took their brand of hockey and social order around the world, to battle on the
ice and in spectators’ minds.

As a student of the game, I had
always believed that creativity was born of individuals such as Gretzky, Orr,
Lemieux, who took us out of our seats to revel in their artistry.
Interestingly, Polsky argues the opposite, that it is the collective approach that
truly bred creativity, likening it to “what Brazilians did with soccer…
[they’re] more creative and they have more style to the game, brought a more
artistic approach to the game. A more beautiful game.”

Red Army uses Soviet defenseman Viacheslav Fetisov as a
narrator of sorts, a vehicle through which to tell the film’s story. Fetisov
played through “three generations of Soviet teams,” and was one of the first
wave of Russians to be allowed to play in the NHL. What’s compelling for Polsky,
a hockey fan who grew up during these eras, is the transition of Fetisov from
enemy (on the Red Army teams), to sympathetic character (in his desire to play
in the NHL), to endearing fan favorite (in his later years with the Detroit Red
Wings). Polsky sees Fetisov as the ultimate embodiment of the Cold War, from its
rise to its eventual fall.

If Fetisov’s story represents the
arc of the protagonist, then the story’s antagonist is Viktor Tikhonov, the head
coach of the Red Army team during its most dominant era. Tikhonov was the
communist dictator of a team during a communist dictatorship. To his team, he
was the USSR itself. When I was growing up, invested and engrossed in the later
era Super Series and the 1987 Canada Cup, I recall thinking Tikhonov’s embodiment
of evil was straight out of a Bond film, and indeed Polsky calls him a “perfect
villain.”

The director recalls a story of Vladislav
Tretiak, perhaps the greatest goaltender to ever strap on pads, asking his
coach if he could train at home because he wanted to see his family. Tikhonov
told him “no” and that if he didn’t train with the collective he “wasn’t
playing.” Contrast this with Tretiak’s rival and competition for the greatest
goalie ever title, the Montreal Canadiens’ Ken Dryden, who sat out during the
1973-74 season over a contract dispute, and used that year to complete a law
degree at McGill University. Perhaps nowhere better can we see the vast
difference between the ideologies resting on opposite sides of the globe than
in the dichotomy of the goaltenders’ narratives.

Just as communism never made it
stateside, the practices of the Red Army team never became part of the habits
of the NHL, with the exception of the Scotty Bowman-era Red Wings, who employed
the Red Army’s 5-man units, as opposed to the North American system, which
interchanges 4 forward lines and 3 defense pairings. Interestingly, Fetisov
(who Bowman drafted in 1975 while coach of the Montreal Canadiens, despite
knowing he’d never be allowed to come to the NHL) was a part of those team, as
were Red Army disciples Vyacheslav Kozlov and Igor Larionov. Teams that notably
won three Stanley Cups during Bowman’s tenure.

Bowman appears in Red Army, creating a bridge between
ideologies and histories, as he also coached against the Red Army in the 1976
and 1981 Canada Cups, as well as what has been called the greatest game ever,
the Red Army versus the Montreal Canadiens on New Year’s Eve 1975. But the NHL
has always eschewed innovation, and the influence of the Red Army begins and
ends with Bowman. But does the argument for the more virtuous system, in hockey
and beyond, end there as well? The Berlin Wall fell. The Cold War ended and the
Soviet Union with it. Russian players came to the NHL, and are now a staple in
the league. Red Army will be a
fascinating look into a part of hockey’s history rarely told, and an intriguing
look into an era of the sport that defines its mythology.

Red Army (directed by Gabe Polsky and produced by Jerry Weintraub and
Werner Herzog) will be released later this year.

Mike Spry is a writer, editor, and columnist who has written for The
Toronto Star, Maisonneuve, and The Smoking Jacket, among
others, and contributes to MTV’s PLAY
with AJ. He is the author of the poetry collection JACK (Snare
Books, 2008), the short story collection Distillery Songs (Insomniac Press,
2011), and the co-author of Cheap Throat: The Diary of a Locked-Out
Hockey Player (Found Press,
2013). His next poetry collection, Bourbon & Eventide, is forthcoming in 2014
from Invisible Publishing. Follow him on Twitter @mdspry.