“No redneck is this creative”: TRUE DETECTIVE and the Horror of Folk Art 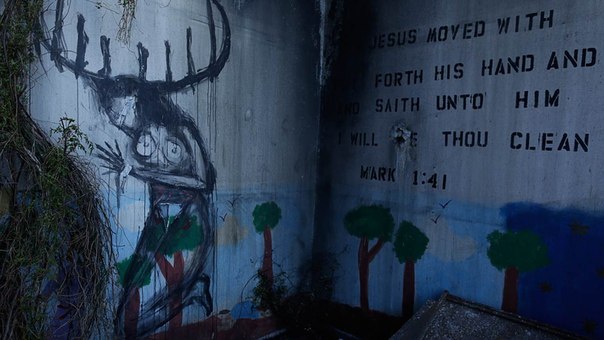 Now and then a television series comes along that seems to
define its own, unique genre: think of Twin
Peaks, The X Files, The Singing Detective.
Now think of True Detective,
which might be described as the first Cult Ritual Serial Killer Southern Gothic
Weird Procedural.  Which is not to say it
is without precedents: since its debut the series has spawned a plethora of online
discussions and commentaries tracing the show’s connections with, and
references to, a host of texts, from pulp fiction to true crime, nihilist
philosophy to urban myth.  Especially
fascinating in these discussions is the way in which a background of seemingly
unrelated stories and images magically click into place, as if they had been
waiting for a narrative that would connect them.

One of the more distinctive and grimly fascinating elements
of True Detective is its preoccupation
with weird folk art, or what could be called outsider art.  Odd and intricate wooden sculptures are found
carefully arranged around the dead body of the series’ first victim, Dora
Lange.  The body itself is decked with
antlers and arranged against a tree in an elaborate display of sacrificial
obeisance, the victim’s back tattooed with a mysterious spiral symbol.  When Rust Cohle (Matthew McConaughey) returns to the scene years
later, this spiral seems to have taken wooden form, in an elaborately
sculptured circle, reminiscent of Andy Goldsworthy’s environmental art.  When clues lead to an abandoned religious
academy, Cohle finds a veritable forest of wooden sculptures inside the
derelict building.  The walls are also
decked with drawings of sinister angels, in a primitive style resembling a
painting discovered earlier in a burnt-out church depicting a horned being that
looks like Dora Lange’s dead body.
Whatever might be said of the killer responsible for Lange’s death, he certainly
is prolific.  Had he found the right art dealer,
he might have become the next Henry Darger or Judith Scott.

The association of horror and folk art in True Detective, like its many other
thematic strands, has a rich and peculiar history, most notably in film.  Much has been written about folk elements in
British horror, as seen in such classics as Wicker
Man, Witchfinder General, and Blood
on Satan’s Claw, and more recently in a new wave of low-budget British
horror films, including The Fallow Field,
Overhill, and A Field in England.  But relatively little has been said about the
parallel tradition in American horror, one that is every bit as rich, and which
True Detective helps us to see anew.

Folk art shouldn’t necessarily be equated with what is
called, alternately, outsider, visionary, or naïve art, but they do share a
quality that might be described as obsessiveness.  In folk art this is generally a healthy,
robust quality, reflecting as it does extreme care in the application of
time-honored traditions, while in outsider art this obessiveness imparts a
certain strangeness, perhaps from the fact that the artist is usually working
in isolation, outside of an enabling tradition.
The similarity between the obsessiveness of artists and serial killers
may be an arbitrary one, but it is one that many filmmakers have
exploited.  Cohle explains why: when
his partner, Marty Hart (Woody Harrelson), compares their suspect to one in an earlier case,
Cohle replies, “That’s just drug insanity. That’s not this, this has
scope.”  A drugged-up killer is
frightening; one with scope is terrifying.
This killer, says Cohle, “articulated a personal vision. Vision is
meaning. Meaning is historical.”  The
same might be said of folk art.

One of the most terrifying instances of folk art in American
horror is The Texas Chainsaw Massacre,
in which a family of demented slaughterhouse workers make grotesque sculptures
out of bones and skin.  When one of their
victims enters their house, she discovers a veritable art gallery of gore: rib-cages
and broken turtle shells hanging like mobiles; human and animal bones
intricately connected to form elaborate standing sculptures; teeth, feathers,
and other parts festooning a primitive gas generator; a perverse chaise longue
built of bones and skulls.

Such images clearly derive from the loathsome objects d’art fashioned by notorious
serial killer Ted Gein from his victims’ remains, but director Tobe Hooper
brings to these objects a demented element of pure form that distinguishes this
sculptor as a kind of twisted visionary.
Remembered largely for its gore and violence, Hooper’s film is as
remarkable for its almost mythic evocation of sadism joined to creativity.  If the meat sculptures of Texas Chainsaw Massacre convey a
particular zeitgeist, it is one best captured by Rust Cohle’s pessimistic view
of Homo sapiens: “I think human
consciousness is a tragic misstep in evolution. We became too self-aware.
Nature created an aspect of nature separate from itself – we are creatures that
should not exist by natural law.”

While Hooper took murder as folk art to a new extreme, his
imagery has precedents, most notably in Alfred Hitchcock’s Psycho.   Norman Bates was,
of course, a talented taxidermist, and his revivified birds loom over the
fateful conversation with the aptly named Marion Crane that precedes her murder.  His sculptural talents are shown in their
fullest expression later, when Marion’s sister, Lila, discovers the preserved
body of Norman’s mother sitting in the cellar.
Such perverse craftsmanship suggests the kind of concentrated attention
Bates brings to all of his work, including murder.

In contrast, the sculptures of Texas Chainsaw Massacre derive much of their horror from their
association with folk art, an association seen in a film like Deliverance that plays upon the cultural
prejudice that connects backwoods folk culture with the sinister or malevolent.  The brilliance of John Boorman’s film (as with
the James Dickey novel on which it was based) is that it places much of this
associated horror in the eye of the beholders, those Atlanta businessmen who
use the remote Georgia wilderness as their playground.  In the famous “dueling banjos” scene, the
character of Drew is barely able to keep up with his accompanist, despite the latter’s
obvious disabilities, and the scene culminates with Drew prophetically shouting
“I’m lost” as he accepts defeat.  Though the backwoods banjo player’s birth defects mark him—and by extension his
music—as grotesque in the visitors’ eyes, the inability of the urbanite to master his arcane art
serves as a measure of folk music’s richness and complexity.

The association of rural culture and the macabre is further
explored in The Blair Witch Project,
where the hapless team of documentary filmmakers stumbles on a backwoods site
filled with primitive cairns and elaborate hanging stick sculptures, the clear
precedent for those that appear repeatedly in True Detective.  When Cohle
shows his drawings of these sculptures to a pastor, he says they look “like
something my old auntie taught us to make when I was a tyke . . . some folks call
them ‘bird traps.’ Old Auntie told us that they were ‘devil nets.’ You put them
around the bed, catch the devil before he gets too close.”  In such moments, the line between madness and
tradition becomes blurred, in a manner that reflects on True Detective’s compelling sense of place.  While the Gen-Xers in Blair Witch are horrified at what these sculptures portend, since
“No redneck is this creative,” True
Detective is more intent on exploring the connection between rural culture
and the sinister in the popular imagination.
Cohle’s fascination with the weird folk art he uncovers turns this
association back on the increasingly obsessive investigator himself, and, by
extension, the perversely fascinated viewer who follows his investigation, episode after episode.

5 thoughts on ““No redneck is this creative”: TRUE DETECTIVE and the Horror of Folk Art”