The Axis of Cool in DRINKING BUDDIES, and How It Tilts 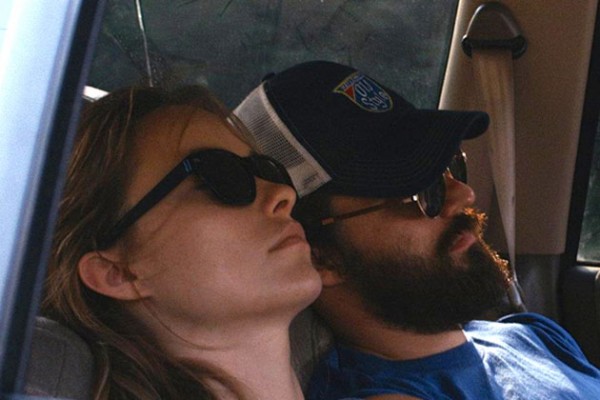 Warning: This piece contains aggressive and open use of spoilers. In fact, spoilers are crucial to the piece. So, if you don’t want to hear about the surprise ending, where everyone leaves on a bal–oops. Never mind.

In the late 1980s, radio commentator Ian Shoales said he didn’t like The Big Chill‘s characters because he was positive none of them would have been friends with him in high school, or words to that effect. The four friends who form the center of Drinking Buddies, though not unlikeable, give off a similar whiff of coolness—so much so, in fact, that they resemble archetypes of young, urban hipsters. This is only worthy of mention, really, because coolness, or its lack, is a defining part of the film, and where each character falls on the film’s coolness axis at any given moment in the film is inversely proportional to that character’s ability to resonate with the unassuming, unsuspecting audience member.

Two of these four confused lovers work at a microbrewery, a perfect fit for them. The microbrew has long been an acknowledged emblem of hipsterhood, regardless of how many knit-capped gals and fellas might clutch Pabst Blue Ribbon 16-ouncers in however many over-crowded performance spaces these days. The brewery provides a perfect Petri dish in which cool affectations can grow and flourish—as when Kate (Olivia Wilde) wears sunglasses at work all too frequently, perhaps to hide hangovers earned after nights spent drinking with friends, but perhaps not. Wilde is comfortable and calm in this role—it’s not a complex part, at first blush, but she uses it to occupy the screen effectively, in the best sense of the word occupy: to inhabit, to live in, to stretch out within. Her friend Luke (Jake Johnson) should be a familiar figure to anyone who’s ever eaten in a gastropub, or been to a show in a hipster deposit area such as Williamsburg, Brooklyn—he has an artfully sloppy beard, he wears a gimme-cap indoors and outdoors, he likes building bonfires (a time-honored hipster ritual), and the company he keeps (artists and other clean-cut, well-spoken types) doesn’t match his folksy exterior. He’s on roughly the same high point of the coolness axis as Kate, for most of the movie. Most of it.

Kate’s boyfriend, Chris (Ron Livingston), is at the other end of that axis, as is Luke’s girlfriend, Jill (Anna Kendrick). Chris seems to be a writer, of some kind, though it’s not clear what type. Livingston is masterful here; Chris has an ingrained arrogance about him which he tries to cover up with a rustic, outdoorsy, wholesome affect, but can’t, quite, and it’s easy to sympathize with his failure. Uncool gestures issue from him like a series of violent sneezes he is helpless to control. In one particularly poignant moment, he lends Kate a copy of Rabbit, Run, a notable misstep, given that John Updike, apart from being one of America’s great prose stylists, was a master of near-pornographic sex scenes in which female characters were almost always objects, rarely subjects. Jill, also, is a wonderfully awkward special education teacher and artist; Kendrick is miles away, in this film, from her breakout role as the malfunctioning corporate drone in Up in the Air, spending her off-hours here making dioramas. When the film requires Jill to step outside of her comfort zone, to handle the possibility that she might have done something devious, she can’t—and all we can think of is that Kate would have handled a similar challenge with far more poise and, yes, cool. We can’t be sure if this is a good thing.

So what happens to rock the apple cart? These characters drink, a lot, as a rule. When you take them out of Chicago and into the woods for a weekend retreat near a beach, well . . . what do you think’s going to happen? Boundaries are crossed: first one, and then the other, and at the end, who breaks up? Kate and her boyfriend. All in all, this isn’t surprising; Chris doesn’t have much of a chance, here, among Kate’s crowd, and he knows it, which is why, after the weekend’s events, he calls things off. What tilts the film in Kate’s favor, though, is the facial expression she makes before Chris is about to break up with her, when he says, in simple terms, that they have to talk; she mashes her lips, and she grimaces, and we know, at this moment, that she’s really feeling something, that she’s reached the antithesis of cool. When is Jill’s uncool moment? Most of the movie, perhaps, but most notably when she returns early from a tropical vacation, crying because she’s done wrong by her man, Luke, and the honest girl inside her can’t stand the thought of it. And Luke? Luke collapses when, after helping Kate move, ripping his hands up on sofa nails, and getting into a fist fight with a stranger over parking, he can’t get Kate to spend time with him alone. The gimme cap, the beard, and the down-to-earth affect help Luke very little here, and he knows he’s whipped; when she suggests they hang out with friends, he makes fun of her, but he ultimately has to leave, his mimicry coming across as empty whining more than anything else. At these moments, the film casts an anchor out, and it hits bottom; we know, after waiting patiently, that we are in the presence of humans. It’s reassuring.

Joe Swanberg, as has been duly noted elsewhere, is building a portrait of a generation with his body of work. You’ve been next to these people at the grocery store, you may have ridden on subways with them, you’ve seen them at certain movie theaters, you’ve most definitely seen them at coffee shops. It’s easy to imagine that, as Swanberg’s films expand in scope, the crisis his characters face, the crucial question—can my plaid, my organic coffee, and my iPod survive my larger life crisis?—will become a more and more resounding issue, until it’s almost deafening. This is a moving, coherent film that could communicate to viewers at any point in the coolness spectrum—the question is, how far is Swanberg willing to depart from that frame of reference to tell a story?