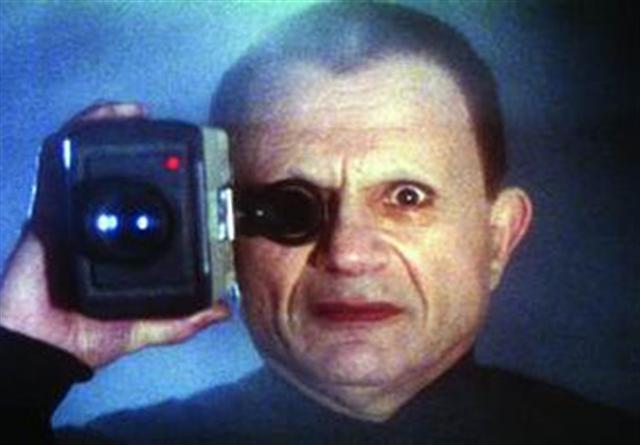 David Lynch could be a wonderful stage director.

Crazy to say, perhaps, but perhaps not. Despite his relentless visual craftsmanship and tests of the limits of that craftsmanship, parading images in front of us that are luscious even when you can barely tell what’s being filmed, there is always an aspect of the staged to every film he makes. Part of it is his privileging of the naked, screaming utterance, from Lula’s “Sailor Ripley, you get me some music on that radio this instant, I mean it!” in Wild at Heart to Frank’s “I’ll fuck anything that MOOOOOOOOOOVES!” in Blue Velvet. These statements always have an ersatz quality to them, as if they were plucked out of another conversation and dropped into the movie at hand. It’s hard to link them, directly, to their contexts—and that incongruity is what makes them memorable. But, ultimately, they come to express truths about the people saying them, as if he, she, or it simply couldn’t wait any longer, just had to burst out with a plume of vulgar, unrestrained self-expression. We laugh, a little, when Sailor Ripley asks, “Did I ever tell ya this here jacket represents a symbol of my individuality, and my belief in personal freedoms?”—but we also don’t. Though Lynch is, in a sense, a truly joyous filmmaker–in that he’s able to transcend scenes of tremendous violence and energy that would pretty much eat up any other filmmaker’s intentions from the inside out, instead making them part of a grand and coldly perfect scheme–he is also, to state the wholly obvious, someone who thrills in catching us off guard, a crucial trick of theater. Why does Robert Blake’s white-faced, ghoulish menace laugh like that in Lost Highway? What’s he laughing at? What could possibly be that funny? Where’s the laugh coming from? No one knows. What’s important, though, is that he’s laughing. The laugh itself has significance beyond what precedes or follows it, and it doesn’t leave you.

And then there’s the matter of the act of performance in his films. In how many of his movies does someone perform, in some sense, so that we watch them doing something they would not normally do, often in a virtuosic fashion? Well, let’s see. There’s Isabella Rossellini's Dorothy Vallens, singing the title song in Blue Velvet (not to mention Dean Stockwell’s brilliant Roy Orbison lip-synching, by now a milestone in the cinematic education of anyone my age, though the scene itself has no purpose within the film’s storyline), there’s Agent Cooper’s talk-show-esque conference, in a room lined with red curtains, with Laura Palmer and the Man from Another Place in Twin Peaks; there’s Betty Elms' (Naomi Watts) orgasmic and career-making audition in Mulholland Drive, and, later in the same film, Rebekah Del Rio’s performance of “Llorando” in an old theater, to name but a few examples. These scenes occupy an inherently elevated position, as if Lynch were saying: This is what the film can really do for you—all the rest of this stuff is just work. This film will never be any better, or these characters any more exalted, than at this moment. And the scenes always have a hypnotic effect; as we watch, we suspend whatever we might be feeling—horror, revulsion, elbow-deep irony—and simply observe, excited at the thought of what Lynch might be about to offer us. Once the moment has passed, we don’t analyze it or question it. We know the scene is indispensable, but we have no idea why.

And what about Lynch’s characters themselves? There are very few of his major figures that can be said to be simply “getting through the story” in a utilitarian fashion—almost all of them have exaggerated traits that make the arcs they move through larger than life. Think of Willem Dafoe’s hit man Bobby Peru in Wild at Heart, whose rotting, dilapidated teeth alone describe an entire life story; or Kyle MacLachlan's Jeffrey Beaumont, his untouched face ravaged by the end of Blue Velvet. Nicolas Cage’s Sailor Ripley is, himself, a walking metaphor for the redeeming power of performance. On the point of being beaten up by a group of thugs at the end of Wild at Heart, Sailor’s last recourse is, like a good performer, to put a good face on things, maintain his Elvis-esque persona, and take his beating. And the moment when Jeffrey Beaumont does the duck walk while courting Sandy Williams in Blue Velvet has the vaguely rhapsodic, pastoral quality of a scene from Eugene O’Neill, something from Ah, Wilderness, say. It’s not a real moment, since the gesture is neither a declaration of love or a shoving away of reality—and yet we have the sense it’s as real as these characters ever get.

A writing teacher, a poet and sometime playwright, once told me and the other students in his poetry class, after he’d asked us to write plays and we responded that we signed up to write poems: Close your eyes, imagine an empty stage, and then think of something you’d like to happen there. That’s your play. Oversimple as this advice might have been, as Lynch’s career has progressed, one might easily imagine he’s making a similar leap into creative desire to fashion films, as his seemingly random, aggressively disorienting and confusing work increasingly resembles the happenings staged by Allan Kaprow or the Fluxus artists who followed him, more than the more traditional "art films" his earlier works resembled. Even in his life outside his work, Lynch has a flair for the theatrical, as when, prior to the release of Inland Empire, he sat with a billboard at the corner of Hollywood and LaBrea Boulevards, his only companion at the time a large cow. Whether this was a publicity stunt, a satire of Hollywood film marketing, or both, its performative aspect was practically its entire content. The events that take place in Inland Empire, Mulholland Drive, or Lost Highway are not necessarily parse-able—who could explain the figures with rabbits’ heads wandering through Inland Empire? Who would want to try? You could, though, depending on your degree of sympathy with Lynch, say they made visual sense within the director’s larger body of work. And they are, beyond that, figures that hold your attention on screen while also encouraging a prilferation of interpretations. Can we say that of a majority of big-budget films? When was the last time you felt mystified at a multiplex?

It is, as suggested earlier, silly to say, of a filmmaker or an artist in another medium, He could have been X, as if X were the ultimate destination, the artist’s current accomplishment only a way station. However, in Lynch’s case, what I want to suggest is that the source of his power is less the ability to shock than the ability to shout. It is through this ability that Lynch’s characters gain their great gravitas, his movies their substance. It seems entirely conceivable that, thousands of years ago, when actors were screaming into the depths of Greek amphitheaters, their statements, far from being the golden-tongued outcries of rage we’ve come to expect, might have been, in the context of their time, closer to this:

Nelson Carvajal is an independent digital filmmaker, writer and content creator based out of Chicago, Illinois. His digital short films usually contain appropriated content and have screened at such venues as the London Underground Film Festival. Carvajal runs a blog called FREE CINEMA NOW which boasts the tagline: "Liberating Independent Film And Video From A Prehistoric Value System."
You can follow Nelson on Twitter here.

Max Winter is the Managing Editor of Press Play.