Could There Be a Truly Gay-Friendly James Bond? 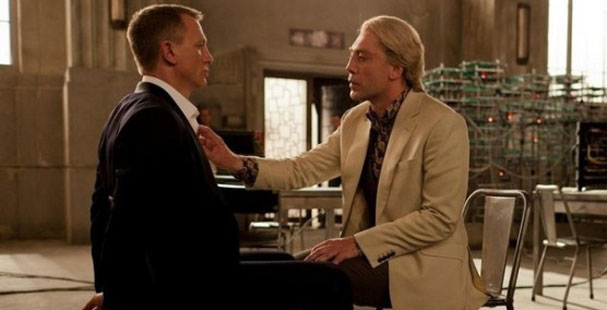 The James Bond series, now celebrating its 50th anniversary, has long been alienating to viewers who aren’t straight white men. Often, the much-celebrated Sean Connery vehicles of the ‘60s now come across as the white British equivalent of Rick Ross’ materialistic hip-hop videos, in which the rapper pours champagne in mansions while women in bikinis dance. The series descended into self-parody once Roger Moore took over Bond’s role, and it seemed to lose its way after Timothy Dalton and Pierce Brosnan, in turn, took his place. Yet the series has considerable legs, and it’s remained commercially potent—with all entries adjusted for inflation, Casino Royale is the third most popular Bond film ever.

It would be unimaginable for James Bond to take a male lover. Nevertheless, some of the recent James Bond films have suggested that someday he might, with kinky homoerotic torture or interrogation scenes. With Casino Royale, the series seemed interested in reaching a female and gay male audience, toning down its customary misogyny and offering up an iconic image of Daniel Craig, in his first role as 007, emerging from the sea clad only in tight briefs. Comparing the recent films to the ‘60s films reveals a lot about changing public attitudes towards masculinity, as well as what phobias have persisted, and how these attitudes survive in film.

The ‘60s Bond films take it for granted that Bond will sleep with every attractive woman he meets, although they tend to elide the exact details of Bond’s sex life. There’s also a tinge of Orientalism to them. From Russia With Love takes place in Istanbul, and You Only Live Twice in Japan. If they offer the heterosexual male spectator the pleasure of gazing at beautiful women, they also give him the opportunity to gaze at distant locales. The two are often linked. Invited to a Roma gathering in Istanbul in From Russia With Love, Bond witnesses a catfight between two women and then gets the chance to sleep with the local patriarch’s daughters. For Bond, travel usually means the chance to sleep with Eastern European, Middle Eastern or Asian women. This is just as true of Skyfall, the series’ latest installment, as the Connery-era films. Orientalism sometimes spills over into overt racism, as in the clueless use of yellowface in You Only Live Twice. If Idris Elba eventually takes over the role from Craig, as has been widely rumored, it would be interesting to see how a black Bond’s sex life plays out and whether it will dodge the stereotypes that may come with this casting.

From Russia With Love revolves around a female Russian spy, Tatiana (Daniela Bianchi), who defects to the West and brings a cryptographic machine with her. Unbeknownst to her, she’s being manipulated by the evil SPECTRE. While she takes action in leaving Russia, most of the film presents her as a passive sex object. To be fair, From Russia With Love depicts Connery with his shirt off, frequently, but he also gets to kick ass. Meanwhile, Tatiana is passed-out during a big action scene on the Orient Express. Only when fighting a betrayal by another woman in defense of Bond does she come to life.

Ian Fleming’s novels and the ‘60s Bond films have inspired a counter-canon of parodies, novels, and films purporting to show what it’s really like to be a spy. John le Carré’s whole body of work emphasizes the gray bureaucracy of espionage, with little sex and deglamorized violence. As early as the mid ‘60s, Joseph Losey’s Modesty Blaise mocked the Bond films, paving the way for Austin Powers and the TV show Archer. Amateur fan fiction writers have explored the homoerotic undercurrents of Quantum of Solace and Casino Royale; the presence of an overtly gay character in Skyfall, even if he’s the villain, is bound to be the jump-off for new stories. The Skyfall-inspired story Tomorrow Is Another Day, for instance, brings back a character from Casino Royale to express the author's disappointment at his disappearance from the films.

Skyfall cuts from an explosion to its sole sex scene, as Bond makes out with an anonymous woman while hiding out in an unidentified tropical location.  Bond will go on to join another woman in the shower, but given the constraints of the PG-13 rating, neither encounter is very explicit. Even so, the film’s libido lags. Bond constantly flirts with his driver and assistant, Eve (Naomie Harris), but nothing consequential comes of it. The two women Bond sleeps with may be disposable, but the film doesn’t degrade them. They’re just not very important .

The Bond films are continuing to send mixed messages to gay spectators. Skyfall is full of images of a shirtless Craig, just as the ‘60s films often stripped Connery to the waist. Nevertheless, it’s hardly accepting of a gay male gaze upon his body. Expanding upon the genital torture scene from Casino Royale, Skyfall has its villain, Silva (Javier Bardem), tie Bond up and proceed to feel him up. All the while, the two men exchange suggestive banter, with Bond even suggesting that he’s had gay sex before. With his hair dyed blonde and a colorful wardrobe, Silva looks stereotypically gay.  However, it’s too bad that Skyfall can’t conjure up homoeroticism without the presence of homophobia to balance it out.  If there’s anything progressive in the film, it lies in the relationship between M (Judi Dench) and Bond. At length, Skyfall explores platonic friendship between men and women, a kind of bond, so to speak, many people don’t even think exists.

In many respects, the ‘60s and ‘present-day Bond films don’t seem so different. Both are willing to show Bond as a fetish object, but only on his own terms. He gets to be a stud, while most of the women he sleeps with are cast aside. But over the years, there’s been a decreasing emphasis on Bond’s womanizing and an expanded role for some of the women he works with. A character like the M of Skyfall would be out of place in Goldfinger or From Russia With Love. Still, in some ways, the Bond films remain as old-fashioned as ever. A queer Bond is obviously never going to appear. Is an unambiguously gay-friendly Bond too much to ask for?

Steven Erickson is a writer and filmmaker based in New York. He has published in newspapers and websites across America, including The Village Voice, Gay City News, The Atlantic, Salon, indieWIRE, The Nashville Scene, Studio Daily and many others. His most recent film is the 2009 short Squawk.

7 thoughts on “Could There Be a Truly Gay-Friendly James Bond?”