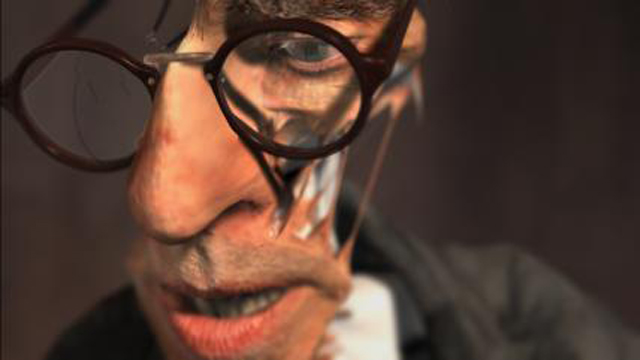 This is the third of six essays based on the list of “250 Great Animated Short Films” recently published here at Press Play.  These six essays are celebrating the inspiration behind some of these films; a complementary series of 20 essays on my cultural history blog, 21 Essays, focuses on common themes.

“… but I’m getting off the subject here, I’m afraid. This story is about Ryan.”

The subject of Ryan (2004) is real: animator Ryan Larkin (1943-2007). The story is drawn from real life, as pieced together from recorded interviews. The visual approach is . . . director Chris Landreth’s interpretation of real life.

But isn’t that the way it always works? The subject of James Boswell’s classic Life of Johnson is Samuel Johnson. The story is pieced together from transcripts and remembrances of conversations. The narrative is . . . Boswell’s interpretation of real life.  Granted, Boswell doesn’t show us Johnson and friends with exposed brain matter, bones, and tendons, yet he manages to find his own strategies to artfully shape the narrative of a life.

A 21st century Boswell might show a CGI-animated Johnson with his Tourette's Syndrome exaggerated, confusing and frightening people with his tics and sudden unexpected motions. Animating real life is a challenge—by nature, animation looks fictional, as opposed to, say, still photography or biography writing, art forms that can make claims to objectivity more easily.

With the dawn of live action film, realism preceded fantasy—Auguste and Louis Lumière precede Georges Méliès. But this process was reversed with the dawn of animated film. The history of animation began with fiction, fantasy, and artful exaggeration. While live action cinema took its first cues from still photography, animation looked to fiction, theater, and the paintings on the salon walls for inspiration.

Ten years after Émile Cohl and Segundo de Chomón made their seminal fantasy animations Fantasmagorie (1908) and The Electric Hotel (1908), pioneering animator Winsor McCay created what is widely regarded as the first attempt at animating documentary material, The Sinking of the Lusitania (1918). McCay’s film aimed for a high degree of realism, documenting the sinking of the ship with the same technical fascination that James Cameron brought to Titanic (1997) nearly eighty years later. Two years in the making, McCay’s masterful drawing talents proved extraordinarily effective in depicting real-life horror and tragedy.

However, moving and innovative as it was, The Sinking of the Lusitania was in many ways a dead end, the last gasp of the newspaper graphic illustration tradition as it was superseded by the alleged realism of photojournalism. McCay returned to fantasy subjects for his final animated films and the idea of using animation to depict contemporary news stories was abandoned.

Animation became a fallback device that documentary filmmakers used as vignettes in longer films, mainly as a way of illustrating abstract ideas. Max and Dave Fleischer used limited animation in their early science shorts, Darwin’s Theory of Evolution and The Einstein Theory of Relativity (both 1923). Disney combined live footage with animation in the feature-length documentary Victory Through Air Power (1943) and the Our Friend the Atom (1957), a TV episode broadcast on Walt Disney’s Wonderful World of Color. This approach wasn't exactly a dead end—animation continues to be a wonderful tool for use in educational and marketing films—but it rarely fully capitalized on the power inherent in animation.

Jump cut to 1973. In Frank Film, Frank and Caroline Mouris presented a radically new strategy for using animation to depict real life—or, more precisely, the real life of the mind. Just nine minutes in length, Frank Film playfully weaves three components, all interacting simultaneously. Two of the components are aural: one soundtrack is of Frank Mouris reflecting on his life and a second overlapping soundtrack has Frank Mouris releasing a monotone torrent of free-association (usually words or phrases starting with the letter ‘f’), riffing on ideas and words overheard on the first soundtrack. The visual component is a rapid-fire animated collage of photos loosely suggested by material on both soundtracks.

Bold and unapologetically weird, Frank Film paved new directions for animation to pursue in the quest for realism—but an internal psychological realism rather than the external realism of McCay’s The Sinking of the Lusitania.  Frank Film is more like a cinematic equivalent to Molly’s soliloquy at the close of James Joyce’s Ulysses.  Decades before attention-deficit disorder entered the public consciousness, Frank Film presciently depicted modern life as an anxiety-inducing bombardment of images and sounds.

While Frank Film is entirely presented from inside Frank’s consciousness, Ryan (2004) uses animation to find universal themes in a cafeteria and a street in Montreal. The ostensible subject is animator Ryan Larkin but in some ways he’s just the MacGuffin (Hitchcock’s famous phrase for a peripheral plot device needed to launch the narrative). In Ryan, Landreth shows a world where everyone is damaged. Animation enables him to depict inner psychological damage in horrific physical ways. The film opens with Landreth showing the damages that life has wrought upon him, and it closes with allusions to his mother’s alcoholism (and a concluding intertitle dedicating the film to her). Every character that passes across the screen is graphically scarred with damage and pain. The compassion elicited by this vision of the world is nearly unbearable. Landreth’s surreal animation forces us to see the excruciating pain behind the real-life conversations that we hear on the soundtrack.

This unflinching brand of animated realism has got to be hard on the filmmakers. Belgian animator Mathieu Labaye took his father as a subject, resulting in a film that’s every bit as emotionally devastating and compassionate as Ryan. Orgesticulanismus (2008) opens with photos of Benoît Labaye, the director’s father, accompanied by a soundtrack of Benoît explaining his way of viewing the world. He has multiple sclerosis. “So when you are deprived of the ability to move, as I am, as many others are . . . in order to survive, you need to reinvent movement.”  In the animation that follows, the son imagines the mental landscape of his father as he dissects and reinvents movement. It’s an act of great love, by turns nightmarish and liberating.

Films like Frank Film, Ryan, and Orgesticulanismus are enlarging the boundaries of film art, suggesting that the boundaries that appeared to distinguish Émile Cohl’s Fantasmagorie from Winsor McCay’s The Sinking of the Lusitania may have been artificial all along. Animation’s natural strength in depiction of fantasy and abstraction may be precisely the element that can make it a powerful vehicle for animating real life.

Here’s a list of 11 films with intriguing realistic or documentary elements drawn from our list of 250 great animated short films. I’ve broadened my net to include films based on memoirs (Caroline Leaf’s The Street is based on the childhood memories of author Mordecai Richler), personal correspondence (Piotr Dumala’s Franz Kafka is based on the author’s correspondence), and interviews (Never Like the First Time!).

Lee Price is the Director of Development at the Conservation Center for Art and Historic Artifacts (Philadelphia, PA). In addition, he writes a popular fundraising column for Public Libraries, writes a tourism/history blog called "Tour America's Treasures," and recently concluded two limited-duration blogs, "June and Art" and "Preserving a Family Collection."