Clint Abides: TROUBLE WITH THE CURVE 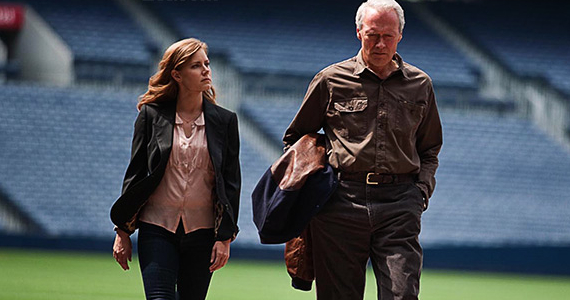 In one of his great essays about baseball, the late A. Bartlett Giamatti famously called the game “our best invention to stay change.” Giamatti (who, besides being president of Yale University, was briefly commissioner of Major League Baseball) added, “I need to think something lasts forever, and it might as well be that state of being that is a game; it might as well be that, in a green field, in the sun.”

The ragtag group of has-beens and hopefuls in Trouble with the Curve would likely share Giamatti’s sentiment. No matter what illnesses or impediments come their way, they cannot let go of the sound of the bat hitting the ball. Seventy-something Atlanta Braves scout Gus Lobel (Clint Eastwood) is going blind, relying on his wits and a magnifying glass to hang onto his job, while former MLB pitcher Johnny Flanagan (Justin Timberlake) seeks to rebrand himself as a broadcaster for the Boston Red Sox after an injury. It is hard to dislike a movie that makes an odd couple out of stars as disparate as Eastwood and Timberlake—Dirty Harry and Sean Parker—and the incongruous pairing is one of the freshest touches in the debut of director Robert Lorenz (a longtime producer for Eastwood).

In Randy Brown’s so-so script, characters of all ages are scrambling for security and status, including Gus’s ambitious lawyer daughter Mickey (Amy Adams), who is hoping to be made a junior partner at her firm. One of the film’s strengths is its willingness to let Gus, Johnny, and Mickey appear weak or desperate. In the Braves’ front office, peopled largely by callow jocks who lean on computer programs rather than firsthand observation to evaluate talent, Gus is mocked as outmoded. Even his old friend Pete (an amiable, mustachioed John Goodman) wonders if something is wrong when he stops by Gus’s house one morning and observes him mistakenly paying the pizza delivery boy with a $50 bill instead of a $20. The look on Goodman’s face suggests he fears something far worse than failing vision: is Gus going senile? When Pete recruits Mickey to look out for her father out on an important scouting trip in North Carolina, his request has all of the subtlety of an intervention.

The pleasure of Trouble with the Curve is not only that Gus will prove the doubters wrong but that he does not care how he is perceived. If he really is not as far gone as Pete and Mickey suspect, what is the harm in their thinking he is? He will get the last laugh, but in the meantime he has no patience for keeping up appearances, unashamed even when he wrecks his car. (Asked the next morning why he has a conspicuous bandage on his cheek, he says with a straight face that he cut himself shaving.) Eastwood’s remarkably open performance (one scene features him tenderly singing “You Are My Sunshine” a capella) suggests that he shares Gus’s wily indifference to others’ opinions, as does his shrug of a response to the humorless criticism he received following his charming, personal speech at the Republican National Convention.

In fact, Trouble with the Curve reflects its star’s gently libertarian disposition. When Mickey tries to mother Gus—helping him with the keys to his motel room or throwing out a hamburger patty he has overcooked—he recoils, all but saying, “Don’t tread on me.” Gus is affronted, too, when the Braves, having learned of his vision problem, suggest he retire and begin drawing a pension. Such gestures are meant to be helpful, but they are bathed in condescension. At the same time, Gus accepts Mickey’s assistance in scouting the presumptive top draft pick because she acts like she’s just . . . chipping in. The film’s politics, such as they are, are not doctrinaire.

Lorenz inherited most of his boss’s usual crew, including cinematographer Tom Stern and editors Joel Cox and Gary Roach, and the result is an unusually well-produced first film. Lorenz has a sure sense of comedy, too, eliciting amusing supporting performances from the reptilian Matthew Lillard (as a go-getting Braves scout) and Joe Massingill (as the draft pick, a misogynistic, self-regarding oaf who calls to mind the wrestler Gorgeous George).

As with several recent Eastwood projects, the biggest liability is the screenplay. Novice screenwriter Randy Brown is simply no James Bridges or William Goldman (authors of two of Eastwood’s best films of the nineties, White Hunter Black Heart and Absolute Power, respectively). His characters lack consistency. Mickey moans about Gus’s uncommunicative manner, implausibly claiming that his emotional distance has driven her to therapy, yet she seems pert and well-adjusted for the most part. What’s more, she has inherited many of her father’s best traits—not just his eye for the game, but his go-it-alone stubbornness and prickly attitude toward co-workers. Was Gus really such a bad dad, to produce such a nice kid? She is not the only one who vacillates. One minute Johnny gladly risks his new career with the Red Sox by taking a counterintuitive piece of advice from Gus and the next he is furious at him for doing just that.

Through it all, though, Eastwood stands firm. Gus gets what he wants, winning a new contract with the Braves with his methods unchanged. He even orchestrates the romance between Mickey and Johnny, like a craggy, cigar-chewing matchmaker. Ever stalwart, Eastwood is, like baseball itself, proof that there is “something abiding,” as A. Bartlett Giamatti would say.