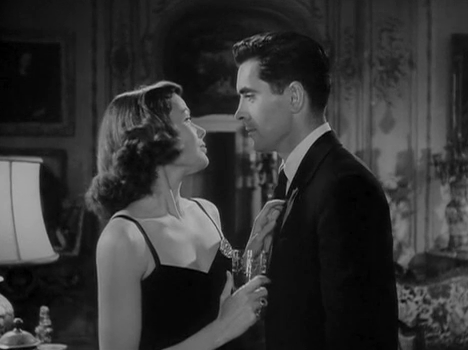 This is the fourth installment of BEAVER'S LODGE, a series of video essays narrated by actor Jim Beaver which will offer critical takes on some of Beaver's favorite films. Jim Beaver is an actor, playwright, and film historian. Best known as Ellsworth on HBO’s Emmy-award winning series DEADWOOD and as Bobby Singer on SUPERNATURAL, he has also starred in such series as HARPER'S ISLAND, JOHN FROM CINCINNATI, and THUNDER ALLEY and appeared in nearly forty motion pictures. You can follow Jim on Twitter.

I don’t usually have a lot of patience for navel-gazing, spiritual-trek, meaning-of-life movies, and I don’t think too many of them have been particularly successful, at least commercially. I put off for years watching this 1946 film adaptation of Somerset Maugham’s 1944 novel for just the reason that I didn’t want to spend two and a half hours watching some guy find himself, even if the guy was someone I like as much as Tyrone Power. Well, that delay was a mistake. It’s not for everyone, I’m sure, and it may have faults as drama, but I found The Razor's Edge a richly rewarding experience. Part of that is due to some really exquisite filmmaking by director Edmund Goulding and cinematographer Arthur Miller, a gorgeous score by Alfred Newman, a literate and dramatic script by Lamar Trotti, and some quietly terrific performances by a starry cast including Power, Gene Tierney, Anne Baxter, Clifton Webb, Elsa Lanchester and others. But part of it is due to the fact that this isn’t just a story of a man seeking his soul and its meaning, it’s a fine mixture of character drama and internal drama, the latter of which isn’t often successfully translated to the screen.

Tyrone Power is Larry Darrell, a World War I veteran shaken by his experiences. Returning to his wealthy home surroundings and the girl he loves, he finds he can no longer settle for a life of avoiding meaning, of mere acquisition and societal “respectability.” His girl, Isabel (an incandescent Gene Tierney), cannot understand why he doesn’t want to “make something of himself,” and thinks he merely wants to have a well-deserved and much-delayed youthful fling, so she sends him off happily to get the wild oats out of his system. But Larry has no interest in oats. He wants to understand why he lived through the war when other men just like him didn’t. He wants to have a life built on meaning, not possessions, a life of understanding rather than mere acceptance of the status quo. And so he sets out on a pilgrimage to follow the path of wisdom, across the razor’s edge.

There is more, much more to the film than Larry’s journey, though that of course is the core of the work. Isabel is astonished to learn that Larry really is prepared to give up the life of plenty that she is so accustomed to, and that he hopes she will join him in doing so. She plots to trap him into the kind of marriage she wants, but isn’t able to. Meantime, the couple’s close friend Sophie, a childhood intimate of Larry’s, has her most happy world torn asunder when her husband and child are killed in an accident. What becomes of poor Sophie is the catalyst in which Larry’s growth is experienced, and it is the source of the highest and most deeply affecting drama of the film.

Tyrone Power came back from the Marines in World War II to resume his career, and he pleaded with Twentieth Century Fox producer Darryl Zanuck to give him more serious and rewarding roles than the swashbucklers he’d specialized in before the war. Zanuck reluctantly complied, and in doing so, gave Power possibly the two best consecutive roles of his career, this and the immediately subsequent Nightmare Alley. Power may well have been the most beautiful man ever born, and it would be easy, though wrong, to dismiss him as just a pretty face. His work in The Razor's Edge is convincing in the extreme. He truly seems to be the seeker he portrays, a man of innate goodness terribly desirous of becoming better. Goodness and internal growth—these are among the hardest things for an actor to portray without drifting into sappiness or cliché, and Power does so extremely well.

Gene Tierney is not merely the female counterpart to Power’s extraordinary beauty, she embodies the sensitive yet shallow callowness of Isabel. We see the qualities that Larry loves about Isabel, yet she commits her mistakes and crimes in ways that stem from an almost innocent inability to let go of how she’s always been told things should be. As a result, Isabel is not a monster or a bitch, not at all. She’s a woman clinging to what she believes is good, but not understanding that it isn’t good at all.

Clifton Webb plays Elliott Templeton in an Oscar-nominated, Golden Globe-winning performance. Elliott is Isabel’s uncle, a vain, snobbish, pretentious, yet somehow gentle and likable man, and when his time for comeuppance arrives, we hope to see him spared. It’s a perfectly marvelous piece of acting.

Considering I raised some eyebrows (and hackles, perhaps) a while back by saying I didn’t think nearly as much of All About Eve as I’m supposed to, and not remotely as much about Anne Baxter’s mannered, phony performance in it as I ought to, it might be surprising to learn that I think she deserved the Oscar and Golden Globe she won for her role as Sophie in The Razor's Edge. Something about Baxter’s work has always bothered me, a certain over-earnestness, a deliberateness that spoke of performance rather than recreated life. But none of that applies to her work here. She’s just tremendous. Certainly it’s a role with the kind of range that wins awards, but she plays it with the kind of assuredness and humanity that deserves awards. Sophie is a great tragic figure, and Baxter does her justice.

In a very small part near the end, the wonderful Elsa Lanchester is mesmerizing as the social secretary to one of Elliott’s “friends.” Lanchester does as much in five minutes as some of our greatest actors have done in 120.

As in the novel, Somerset Maugham is a character in his own story. Herbert Marshall plays Maugham, a sort of onlooker/narrator/confidante, and does so very well. I confess that, watching this film with Marshall acting in it and Edmund Goulding directing, I could not avoid remembering a hysterically funny story told in one of David Niven’s autobiographies about him and the wooden-legged Marshall falling down a hill while serving as Goulding’s pallbearers and carrying his coffin. It didn’t help me concentrate on the drama at hand, and now it probably won’t help you, either. But it’s a great story.

I’m so glad I finally wised up and saw The Razor's Edge. I felt very good once I had.