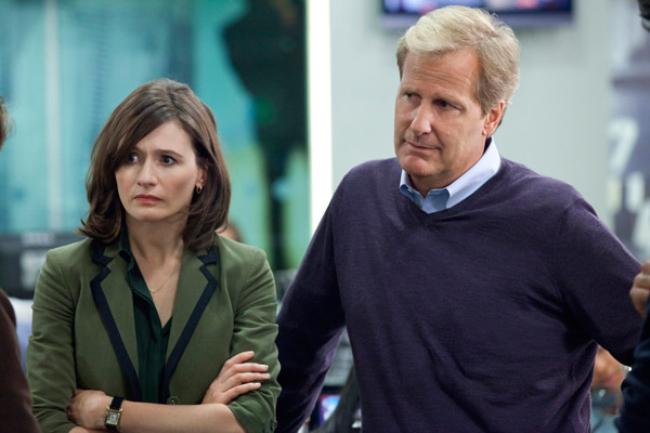 For Aaron Sorkin’s characters, doing your job and falling in love are often inseparable processes: Natalie schooled Jeremy on television producing and love on Sports Night, Josh Lyman and Donna Moss bantered over bills on The West Wing, and Matt Albie and Harriet Hayes worked out their issues on the set of Studio 60 on the Sunset Strip. The staff of Will McAvoy’s show, from the big dog himself down to his most junior producers, is no exception to this rule. The staffers all have romance troubles they’re working out on set, this week in the form of bizarrely histrionic public displays of angst. And while it’s grating enough to see competent women reduced to workplace fits at the behest of men, there’s a particularly weird contrast between MacKenzie’s extended meltdowns and her antiseptic approach to what she puts on the  air. She’s supposed to be the strongest female character on The Newsroom, but increasingly, it seems like she exists to mouth Aaron Sorkin’s platitudes and to debase herself before Will.

“We don’t do good television,” she explains towards the beginning of the episode. “We do the news.” It’s the kind of Sorkinism on the journalism business that sounds good at first but doesn’t actually make sense after any careful consideration: good television and the news aren’t actually mutually exclusive. In the pilot, the staff of Will’s show congratulated themselves on covering Deepwater Horizon as a corporate cover-up instead of as a rescue story. The death or survival of a dozen people apparently doesn’t count as news in this schema, unless there’s a demonstrable government cover-up. It left me wondering how News Night might cover the tornadoes in Joplin, Missouri. Would the victims of that natural disaster be deemed unduly heart-tugging if Halliburton wasn’t somehow culpable.

Tonight, MacKenzie deems a source blogger Neal tracked down as unworthy, a man whose parents brought him to the U.S. as a child and who learned in adult life that he was an undocumented immigrant, a chain of events that led to the loss of his driver’s license and potentially his job. “I’ve got to budget 42 minutes. I’ve already spent 18 minutes on Jan Brewer and La Raza,” MacKenzie insists. “Even if we did have the time, it would be emotionally manipulative. We’d be putting him there to feel sorry for him.” Neal protests, “We should feel sorry for him. He’s getting screwed.” MacKenzie crisply tells him, “I don’t want to feel sorry for anyone. I want the facts.”

Again, this sounds good, but it represents a sterile approach to the news. Sometimes, facts are incomprehensible without faces and stories about how they function attached to them. If Will’s supposed to play lawyer, presenting the best form of each side’s arguments, then he needs to have the best possible clients representing those views of the world. In MacKenzie’s view of things, that’s apparently a talking head from the National Council of La Raza rather than someone whose life has directly been impacted by immigration policy—she never considers the possibility that she could bring both men on the air. Maybe that’s a tiny thing to quibble over, but it furthers a sense that The Newsroom is disengaged both from the realities of reporting, and from the kinds of personal stories that often further social change.

For most of the episode, we see MacKenzie as a hectoring, sometimes condescending, but always stringent idealist when it comes to her vision of how the news should be reported. She’s a schoolmarm, telling the audience what to think more than she’s actually teaching her staff how to do their jobs. Given this characterization, you’d think The Newsroom would want to give her a rich, complex personal life, and maybe a sense of humor, so the audience could engage with her as something other than as a scold. But instead, she comes across as an immature, hystrionic brat who demands that everyone else be riveted by her weirdly mundane problems. When she finds out that economics anchor Sloan (Olivia Munn)—who MacKenzie has asked to anchor segments because “If I’m going to get people to listen to an economics lesson I need someone who doesn’t look like George Bernard Shaw”—thinks that Will cheated on MacKenzie and that’s why they broke up, she goes ballistic. “You need to do this. You need to go from person to person and tell them that Will is an extraordinary man with a heart the size of a range rover,” MacKenzie demands. To her credit, she backs off almost immediately, realizing she’s asked for something bonkers. But I’ve still never loved Olivia Munn more than the moment when Sloan informs MacKenzie briskly that she has no intention of re-arranging her day to rectify what MacKenzie views as a massive injustice, because she has facts to report. We don’t learn much about Munn in this episode, but she comes across as brisk and perceptive, a slightly more realistic Avery Jessup from 30 Rock, and at this point, she’s the only character I’m looking forward to getting know better.

That meltdown alone might have had me wondering whether MacKenzie has a split personality, or is just the victim of being Sorkin’s vessel rather than an actual person. But it’s not as if Sloan’s chat with MacKenzie has righted her ship. “Are people here under the impression that Will is an ass?” she asks her staff in a fit of panic, later. “You’re wrong. It’s wrong. And it’s an injustice.” Then, in a plotline that more likely originates in Sorkin’s well-publicized antipathy towards technology than from any actually plausible experience of a war correspondent who’s been filing stories from overseas for years, she sends an email meant for Will that goes to the entire office, then responds by destroying a staffer’s BlackBerry, demanding that she wants “everyone to delete the email you just received. Honor system,” and begging someone to destroy Will’s computer with a baseball bat in an increasingly hysterical tone.

I don’t particularly blame Will for being upset that MacKenzie broke his trust—he’s a vulnerable, vain, prickly man, and I can buy that he wouldn’t want anyone to know he was cheated on even though it was MacKenzie who transgressed. But when he screams at her “You know how something happens in an instant that is so astonishing you completely shut down? That doesn’t fucking happen to me,” he loses me. “The women who are here exist, quite simply, on the theory that nothing is more dramatically important than a man becoming great, and men cannot become great without women to inspire, provoke, and drive them,” NPR’s Linda Holmes wrote in her terrific review of The Newsroom before its release. Like Linda, I find that worldview inherently unattractive, and there’s additionally distasteful in the idea that we’re supposed to care so much about the fact that Will’s composure has been rattled.

When the lives of undocumented immigrants are at stake, emotion is a pointless distraction. But when MacKenzie’s upset or Will’s been wronged, we’re supposed to believe that their feelings are the most critical thing in the world. I know that The Newsroom wants me to feel more attached to its characters than to their subjects. But after two hours in their company I’d rather be hanging out with an undocumented immigrant in Spokane, Washington, than the supposedly-brilliant, self-absorbed people who snidely dismiss him as less than newsworthy.

Alyssa Rosenberg is a culture reporter for ThinkProgress.org. She is a correspondent for TheAtlantic.com and The Loop 21. Alyssa grew up in Massachusetts and holds a BA in humanities from Yale University. Before joining ThinkProgress, she was editor of Washingtonian.com and a staff correspondent at Government Executive. Her work has appeared in Esquire.com, The Daily, The American Prospect, The New Republic, National Journal, and The Daily Beast.