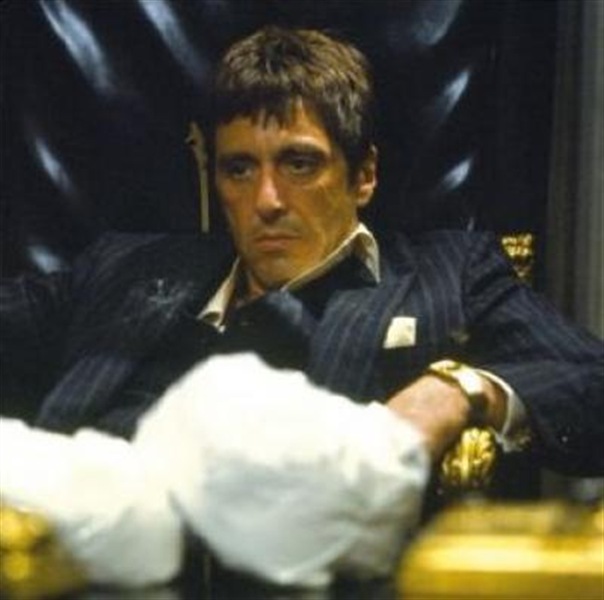 For roughly the last one hundred and thirty years cocaine has been the drug of choice for the working class—in fact, for even longer than that, common workers often used it as an energizer. South American indigenous populations in the Andean Region survived centuries of arduous living conditions (rough terrain, high elevations) by chewing on the cocaine leaf; in North America, during the 1890s, African American workers were actually given cocaine by their employers in an effort to help them pummel through the harsh working conditions of railroad construction and mining. The modern world, however, has seen the cocaine drug go down two polar, simultaneous routes: the “crack” cocaine circuit in poverty-stricken inner-cities, and the elite, expensive distribution rings among the rich and powerful urban elite. And in today’s pop culture, cocaine has retained its rebellious status of being an exciting and attractive goad, especially on the silver screen. It’s no surprise that Scarface’s Tony Montana remains a better-known figure than say, To Kill A Mockingbird’s Atticus Finch.

But cocaine’s presence in movies is a tricky object to dissect. It’s never really a MacGuffin. Audiences are very familiar with cocaine’s societal significance. It is, after all, a destructive catalyst in the never-ending, off-camera narrative called The War on Drugs. Still, even with an awful, bloody contemporary history under its belt, cocaine seems to be the “cool” drug for modern cinematic heroes and heroines. Unlike marijuana, which often inspires bum-lazy comedies (Half Baked, Up In Smoke) or heroin, which provokes stark warning-label movies (Requiem For A Dream, Trainspotting), cocaine is usually presented as the “Fonzie” of narcotics: in style and very much the life of the party. Sure, there are the occasional movies offering instructive principles on the perils of cocaine addiction (Less Than Zero comes to mind) but for the most part, movies treat cocaine with zeal and elation. Johnny Depp defined his crime kingpin character with a badass stroll through the airport—with suitcases of cocaine in hand—to the tune of Ram Jam’s “Black Betty” in Blow. Uma Thurman snorted some lines of coke in the Jack Rabbit Slims women’s restroom before partaking in a show-stopping dance with John Travolta in Pulp Fiction. Even when it’s the punch line of comedies (Walk Hard, Corky Romano), cocaine miraculously dodges any serious negative connotation. Cocaine is the naughty drug that no one in the movie auditorium will dare admit to being drawn to—a narcotic pastiche that’s continually expanding its cinematic iconography.

Ultimately, in the movies—as in life—the cocaine-laden screen heroes get their comeuppance. Who could forget Uma’s near-fatal mistaking of a bag of heroin for cocaine in Pulp Fiction? Or Mark Wahlberg almost getting his head shot off during a botched coke deal at the end of Boogie Nights? Strangely, such climactic, nightmarish instances aren’t what moviegoers tend to recall or replay in their heads.  Moviegoers like to remember Tony Montana as a king perched behind his cocaine-piled desk, and not as a dead body floating in a mansion lobby fountain. As on the wretched morning after a wild party, it’s always easier to cling on to the previous night’s happier moment. And for audiences, this may be the safest of vicarious pleasures; a gateway drug to cinematic escapism, without having to face the reality of cocaine addiction and violence.

Nelson Carvajal is an independent digital filmmaker, writer and content creator based out of Chicago, Illinois. His digital short films usually contain appropriated content and have screened at such venues as the London Underground Film Festival. Carvajal runs a blog called FREE CINEMA NOW which boasts the tagline: "Liberating Independent Film And Video From A Prehistoric Value System."