GREY MATTERS: What Is Sherlock Holmes Afraid Of? 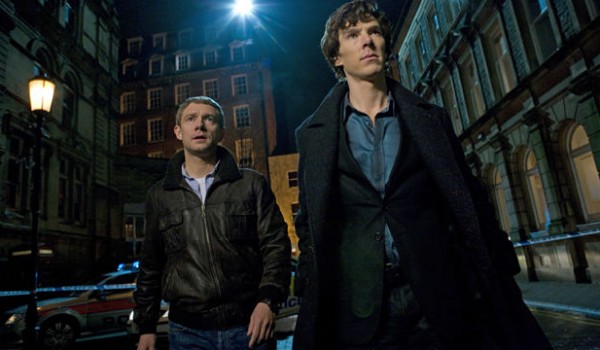 Sherlock, Steven Moffat and Mark Gatiss’s present-day adaptation of Sir Arthur Conan Doyle’s century-old sleuthing stories, gives us two heroic figures struggling with, well, not much. But you wouldn’t know it to watch them, as the creators of the most recent version of Doctor Who conjure up one of this year’s best rides.

It’s a show that lacks not one bit of wit, pace, and all-around smarts. It gives you everything you could reasonably want from a Sherlock Holmes movie—and not one iota more. It sidles right up to greatness—but stops right before it gets there.

The splendidly named Benedict Cumberbatch and his magnificent cheekbones play Sherlock as a zero-patience dandy with a mainframe for a brain. This Sherlock, using deductive reasoning, can suss out your life story from a scratch on your watch and a murder from a smear on a wall. He shares the storied 221B Baker Street flat with Afghanistan war veteran Doctor John Watson (the UK Office’s Martin Freeman), the only person he can tolerate for more than sixty seconds. Watson, in turn, is enthralled by Holmes’ brilliance. Thus, a bromance blooms, as arcane cases are engaged at light speed.

And aside from a consistent subplot in which Watson hopes to bring out the human side in Sherlock that may not exist, that is that. Never has a cigar so strenuously insisted it is just a cigar.  Or, in Sherlock’s case, a nicotine patch. Once the dust settles, the most remarkable thing about Moffat and Gatiss’ smashing new Sherlock is how little there is to say about it, on the surface.

It should be said that there are some fun updates. Dr. Watson posts Holmes’ adventures in a blog. High tech replaces creaky Victorian science. And Moriarty is now a master computer coder/madman with a Bee Gees infatuation, a playful riff on Doyle’s vision of Sherlock’s arch enemy, who was a master criminal utilizing the day’s highest technology to wreak havoc (Watson would call him “the famous scientific criminal”).

In addition, Doctor Who fans can, of course, point out the traits The Doctor and Sherlock share: uncontrollable braininess, love of long coats and fascinated companions, the threat of boredom, and arch enemies. But where Doctor Who has turned out to be the stuff of university courses, Sherlock displays a flashy insubstantiality. Which is, again, fine. Or is it?

After the end of the second season broadcast two weeks ago, the image I have trapped in my mind is that of Sherlock and Watson in a long dark corridor, running, from a scene on the show. By now I wonder, however, what from?

Doyle was a man of his time. He disapproved of women’s right to vote and created in Sherlock the ultimate logical man, one who believed that “women are never to be entirely trusted—not the best of them” and “ "the motives of women . . . so inscrutable . . . . How can you build on such quicksand?”

Moffat and Gatiss, meanwhile, who brought to Who not one but two main female characters as integral as the Doctor, along with some of TV's most ceaseless casting of female secondary characters, are the most feminist showrunners this side of Joss Whedon. They’ve gone beyond mere surface changes, pissing off the traditionalists to make their show really work in the 21st century.

Already their Sherlock doesn’t dislike women any more than men. But then it gets complicated.

I’ll take Watson’s word that he and Sherlock are not gay. But what are we to make of Sherlock, cutting an almost ridiculously Romantic figure, running across the hills and moors of the Baskervilles with his scarf and Saville Row coat unfurling in the whipping wind?

I’d say the game is afoot.

Aside from the absurdity of Adler as a character—in 90 minutes she goes from S & M top to intellectual peer to Bond-style girl of international mystery to terrorist victim—there’s the dissonance of any of these female types fitting into any Sherlock-esque story. (Yes, I know an Irene Adler exists in the Canon, but she was nothing like this, and that was another Sherlock, a long time ago.)

The Holmes stories have nothing to do with love. When Sherlock makes it clear to Watson that he doesn’t have friends in the plural sense, you realize there is even less room for a lover, and the obligations love entails. And that’s why the story rings so hollowly.

He lives in an intrinsically adolescent, sex-negative safe zone—which also describes the official club for Holmes enthusiasts, The Baker Street Irregulars, who did not allow female members until 1991, when the appearance of ASH (The Adventuresses of Sherlock Holmes) leveled the non-erotic playing field.

At the moment, we’re at the exact point in the show’s existence where Watson can’t continue to look satisfied with his exclusive relationship with Sherlock without wanting something more. (My limited understanding of the books is that he gets a bit more, but that this happens largely off-stage, which wouldn’t be adequate for modern drama.)

The point is—who are these guys? For two short seasons the show has floated on appearances, in a very Victorian fashion. And I suppose it could keep doing that, in a very "series TV" fashion.

And I know, for a show that doesn’t give you much to talk about, I certainly talked a great deal, but that’s what I’m talking about—the empty spaces, the things the show hasn’t yet addressed.

Earlier, in “The Hound of the Baskervilles,” drugs cause Sherlock to think he’s seen a monster, which leads to doubt, which he suffers badly.  Add this to his usual arrogance and tiny cruelties, and you wonder why other characters insist that Sherlock could be a great man.  Not a good one, a great man.  And yet it’s Moriarty, a mad genius, a sociopathic criminal and mass murderer who sees in Holmes a fellow traveler in boredom and compulsive puzzle playing, who’s more accurate.

Watson too has his own dark bipolarity.  When we first meet him, he seems to be suffering from PTSD. But as he says himself, what was wrong was that he missed war. The thrill of being with Sherlock—the crime, death and violence—was curing him.

If Moffat and Gatiss want, they can tell the traditionalists this: Hey, we stayed true to the original model for two seasons. But Sherlock is gaining an international audience. If you could take Russell T. Davis’ version of Doctor Who and make it your own, can’t we add some dark shadows to this Victorian black and white?

6 thoughts on “GREY MATTERS: What Is Sherlock Holmes Afraid Of?”