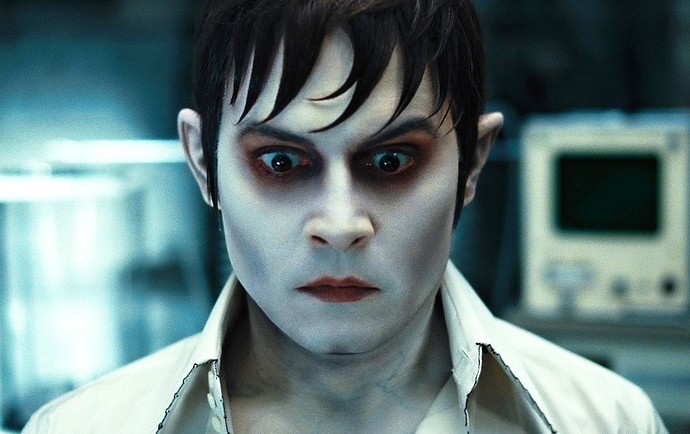 This ubiquitous quote by Rudin is often the throwaway summation found in most writings on, and dissections of, the cinematic works of Tim Burton with Johnny Depp. Which is a shame, really. The quote is not only too broad—it’s blazingly deceptive. Unlike other repeated director-actor pairings (from Martin Scorsese-Robert De Niro to Pedro Almodovar-Penelope Cruz), each succeeding film in the Burton-Depp canon actually becomes less about “digging” into an unknown abyss (e.g. as Scorsese faced male insecurity in Raging Bull and Almodovar celebrated female power over male dominance in Volver) than about the overall art direction of each film. Even though Burton’s prolific filmography boasts its share of critically (Big Fish) and financial successful (Planet of the Apes) non-Depp-starring movies, it’s worth studying the pattern behind those eight Burton-Depp projects. All together, those eight films have broken numerous box office records and have catapulted Burton into a tier of top-dollar directors. Currently, Burton is one of the few directors who could harness a towering financial investment from a studio in order to bring to any stylized, eye-pleasing idea he has to life.  In fact, if one were to examine the Burton-Depp filmography from top to bottom, it’s quite easy to see the shift from the personal to the pizzazz-filled.

Burton’s first two films with Depp are still his strongest and best works because each film subtly emoted shades of its creator: the shy, social outcast in Edward Scissorhands and the ambitious young filmmaker in Ed Wood. Even with impressive set pieces and dazzling costume design, both films were dominated by Johnny Depp’s carefully nuanced performances. It was the perfect marriage between Burton’s striking, visual storytelling and Depp’s risk-taking performance-art-style acting. Even though most films employ such marriages of talents, Scissorhands and Wood are unique in that they operate on two levels: the surface level looks and sounds like big budget Hollywood but (after repeated viewings) the pulse and internal workings of those films speak to more personal truths (i.e. the anxieties of the outcast), largely because Depp and Burton channeled one another’s sensibilities toward the material, thus giving those films a palpable vitality.

But then something happened. On their third collaboration, Sleepy Hollow, signs of a new Burton cinema began to emerge. This new Tim Burton cinema canon was more concerned with pushing the boundaries of its production design. In Sleepy Hollow, Depp’s (oft-underappreciated) turn as a morbidly grossed-out Ichabod Crane takes a backseat to the moody set pieces and strong work by the FX team. Gone were the quirky tableside manners of Scissorhands or cross-dressing revelations of Wood; in their place were the technically accomplished renderings of ghouls and the gothic. And Burton’s next two live-action films, Charlie and the Chocolate Factory and Sweeney Todd (both remakes), pushed the eye-candy envelope even further. Chocolate Factory basically forced Depp to become a peripheral player in the Burton blueprint of euphoric, candy-centric visualizations. Although Depp scored a Best Actor nomination for Sweeney Todd, his performance—which largely depended on Depp’s ability to always look sullen—is hardly a return to his intimate, versatile turns in Burton’s earlier works. Todd was based on a revered musical, and Depp rose to the occasion with singing chops; Burton turned in some strong visionary work once again (the bloody and bestial barbershop is a beaut), winning Burton the Best Director prize from the National Board of Review. So there’s that.

The real abomination came after the pair’s animated stint in Corpse Bride (which rehashed the stop-motion gothic fare of the Burton-produced Nightmare Before Christmas) and ironically enough became their biggest commercial success: Alice In Wonderland. A mammoth at the box office but overall critical dud, what Wonderland proved was that the new Burton-Depp formula had reached an apex. Early Burton films like Scissorhands had embedded themselves in pop culture to the point where audiences were simply content with knowing that Johnny Depp would be playing an unusual Burton-esque character in an unusual Burton-esque universe (a world somewhere between a Halloween-themed prom and alternate dimension “Saturn” from Beetlejuice). And it’s not that Burton doesn’t know how to make a surefire blockbuster that is also his own singular work of art (see Batman). In the end, the massively financially successful groove that Burton and Depp are in is probably the natural progression that some artists can make after churning out those intimate stories about dying (Beetlejuice), isolation (Edward Scissorhands) and finding your bicycle (Pee-wee’s Big Adventure). So if the latest Burton-Depp vehicle, Dark Shadows, is not a return to earlier form for the pair, at least it will deliver unmatched art direction and unrivaled commercial success. And if that’s the case, maybe Depp really is playing Burton in all of his movies; only now Burton isn’t the isolated, hungry filmmaker he once was.

Nelson Carvajal is an independent digital filmmaker, writer and content creator based out of Chicago, Illinois. His digital short films usually contain appropriated content and have screened at such venues as the London Underground Film Festival. Carvajal runs a blog called FREE CINEMA NOW which boasts the tagline: "Liberating Independent Film And Video From A Prehistoric Value System."