GREY MATTERS: The Decline and Fall of April Ludgate 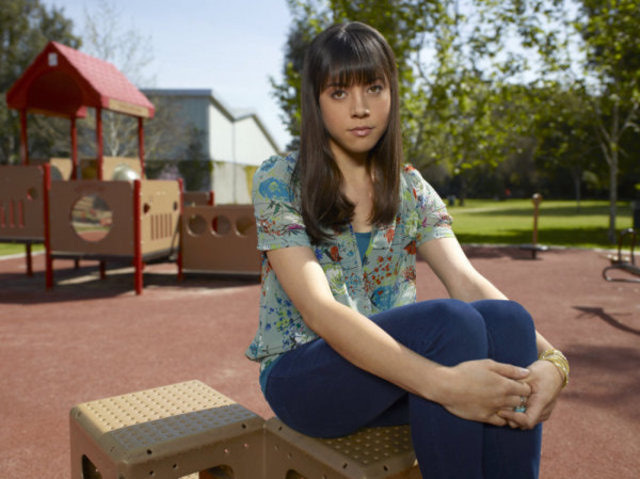 I guess it was inevitable, especially when you think about the place of women in TV and the size of the NBC machine. But the worst has come to pass, and April Ludgate, the beyond-deadpan carrier of careless anarchic energies, the one-woman friction element who’s kept Parks and Recreation from being an Office clone from the unsteady git-go, has been muffled into a millennial-generation version of a wacky neighbor from a sitcom.

This, well, sucks. Because April Ludgate, it’s not a stretch to say, is the most extreme, most uncompromisingly strange, noncompliant female character in the history of broadcast TV. There is no mold for April Ludgate to break. When she ends up sunning herself in a South American dictator’s pool in one episode, the joke is that she fits there as well as she fits in small town America. Meaning she doesn’t, to her amusement.

Because of April, Parks and Recreation was an utterly unique situation comedy, set in a binary universe.

On the one hand we had Amy Poehler, playing Leslie Knope, a passionate bureaucrat in an Indiana small town’s Parks and Rec department, and her hugely adorable co-workers.

And on the other hand, as if reporting in from a parallel universe lorded over by deadpan semi-surrealist Steven Wright, there was April Ludgate (Aubrey Plaza), permanently hunched over, with huge, give-me-a-break rolling eyes, snark, and all-around Dada-esque hostility.

But now? Now the girl who used to answer the phone with impossible dates and times, glower at the horizon for fun, and hang up on people for sport—all to the endless delight of her boss, no-government Ron, it should be mentioned—has been shorn of her playful, perverse and puckish identity.

She now prefers conservative work force clothing to better integrate into the office. She also shares hugs with anyone when needed, and when her cutely thick musician husband Andy (Chris Pratt) does something really dumb, she will throw her arms up and cry “Andy!” like a million other flustered wives before her. All that’s missing is a laugh track.

How far the mighty fall. I mean, sure, she’ll say something surly every now and then: I bet they have five or six 18 year old interns at NBC tasked with the job of coining her devilish rejoinders.

Anyway. Back in the day (before this season), I loved the way that April and Ron had bonded as peers in their mutual disgust over institutions, government, groups and, hell, everything but rare steaks, whiskey and causing more problems.

Not anymore! Now that Ron has committed an actual act of governance and promoted April to a job with more responsibilities, he has also become a father figure for April, because all girls, the subtext logic goes, especially uppity ones like April Ludgate, are really looking for the right substitute father.

Maybe here you can see why The Girl with the Dragon Tattoo was so remarkable. When Rooney Mara’s punk hacker was dragged into another dubious Girl Domestication scenario with another Oedipal-freighted father replacement, she soundly rejected it: that just doesn’t happen that much. That is breaking the law, after all.

Meanwhile, as I mourn April Ludgate’s spiky soul—I can see, in indelible ink, the writing on her face, saying “Don’t worry folks! She’s normal! Really!”—the show itself trundles to an ignoble season’s end.

Knope has run for city council. Since this is NBC and actual political parties cannot be named, the show instead goes for the Maureen Dowd school of politics, where there are no issues or ideologies, only personalities.

Knope should win, the show argues, because she’s wanted it longer. Me, I could use less of my favorite comic actor getting shitfaced and falling into hot tubs, failing career-making interviews and becoming the buffoon she never was.

Meanwhile, over in the kingdom of bad decisions of which April is queen, we find a high princess in Ann Perkins (Rashida Jones). Like April, Ann has been shorn of delightful prickliness and is now so needy that she pairs up with Tom, because he is now an adorable man-child. Or child-man.

Look. I revel in the promise of serialized TV’s ability to let people change. But there has never been any fine print about devolving them. And the other promise and pleasure is that they also stay essentially the same. I just don’t buy a Knope who’s recently so often a dope, or an Ann willing to forget everything she knows about romance so that Tom can annoy her into having sex—or as Tom described it, “The four sweetest words: you wore me down.”

Maybe I’m spoiled by girls doing whatever they want. Maybe I’m paranoid about endless notes and tweakings by suits after terrible ratings because lord knows Parks & Rec had those last year, but when all your female characters have been blunted and your male characters left the same or improved, it's just weird. Add on characters name-dropping the feminist critic Laura Mulvey and making knowing reference to “the male gaze” in time for Ron to have hot monkey sex with an actual female feminist, and I can’t help but feel as if the showrunners are not only winking at us, but at least partially aware that they knew exactly what they were doing with, say, April,
and probably knew we'd be at least somewhat put off by it, and hence the un-Parks and Rec-like avalanche of Community-style referencing meant to ensure we don’t get actually mad at them about doing any of it, because, like, see, we get the whole discourse, so we’re cool, right?

Still, the anarchy-in-the-USA energies have been passed to a male body now: that of real-life Republican Rob Lowe, here playing state auditor Chris Traeger.  (Yes, that is irony.)

At first a running joke of narcissism and mortality fear, Chris’s encroaching middle age anxieties have turned him into the show’s new wildcard of strange/insightful behavior (playing terrifying Gregorian chants at a Valentine’s Day DJ gig for example). Chris, it seems, is the new April.

With HBO’s Girls zeitgeist on the one hand and FOX’s retrogressive indie pixie gold mine The New Girl on the other, next season will tell whether April and the other women on Parks and Rec are allowed to rediscover their spiky roots. I hate to say it, but my hopes are not high. And maybe if I don’t watch any more demoted Aprils, I can think of this impossible character more as some incredibly rare, unstable mineral that let off this amazing, crazy light that was never meant to shine more than a few years before exploding beautifully into nothing. Yeah—I can think about it that way without getting cranky.

15 thoughts on “GREY MATTERS: The Decline and Fall of April Ludgate”