The Androgyny of Artists: An Interview with Mary Harron 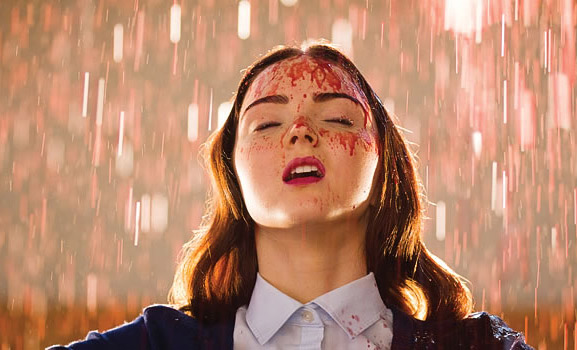 In the short span of four feature films, director Mary Harron has created an intense body of work, in which deeply conflicted characters work through identity crises. Harron’s most famous protagonist is probably the psychotic Patrick Bateman in American Psycho (2000). But just like Patrick, both Valerie Solanas in I Shot Andy Warhol (1996) and Bettie Page in The Notorious Bettie Page (2005), Harron's two other films, find themselves trying to strike poses that don’t quite fit them.

So goes Harron’s new movie, The Moth Diaries (2011), a vampire melodrama set at an all-girls' boarding school. Rebecca (Sarah Bolger), a young but lonely adolescent, unconsciously reshapes her life as a gothic novel. This makes Ernessa (Lily Cole), a pale and mysterious new girl, Dracula to Rebecca’s Mina Harker. I talked with Harron via email last week about the effect of conflating ourselves with our public personas.

Many of your movies revolve around the disparity between modes of representation (journals, plays and pornography) and the essence of what they're portraying. Having been an arts critic, I'm curious how you feel the gothic novel has grown, and how that's reflected in The Moth Diaries' use of the gothic novel as a false source of comfort for our heroine. Her narrative is, after all, phrased as a dysfunctional gothic novel (as Ernessa says at the end, nothing can save Rebecca, not even the gothic novel narrative she's created for herself).

Mary Harron (MH): I can't really speak to the present day gothic novel, because I haven't read many of them.  When I was working on The Moth Diaries, I did read a lot of the classic gothic, Bram Stoker, and Sheridan Le Fanu, and some later British horror like M.R. James.

In the film, when Rebecca reads Le Fanu's Carmilla, is the book giving her clues to understanding who Ernessa really is, or is it fueling her paranoia?  You have to draw your own conclusions.  However, I don't think it's true that nothing can save Rebecca.  I think she saves herself—because she's created so much havoc, she's taken away from the school. To me it's quite a hopeful ending. She's left the school (adolescence), and now she's out in the world. She's going to face her adult life, whatever that will be.

The teacher, Mr. Davies, who is conducting the class in 'literature and the supernatural,' is the 'expert' you always find in gothic literature.  The early vampire stories always have a professor or academic or doctor who comes in and explains everything, but sometimes he gives the wrong explanation, or can't see what's in front of his eyes.  I love how you can't trust the experts in those books.  Anyway Mr. Davies thinks that his discussions with Rebecca are about Gothic literature, about metaphor, and she thinks they are about something absolutely real.  Just as when she comes to talk to him about Lucy, he thinks they're talking about anorexia but she's trying to tell him about a vampire.  Neither one is listening to the other.

I also find it striking that almost all of your feature films contain characters that are just as much victims as they are active creators of their own self-images, which often come across as schizoid personas. Bettie Page is a good girl that can't stop herself from being bad. Patrick Bateman can barely hide his blood thirst beneath a sheen of yuppy respectability. Valerie Solanas grew to resent that her pointedly vulgar and revolutionary rhetoric was misunderstood. And now The Moth Diaries' Rebecca is a victim of the traditional gothic story she's created for herself. Is it necessarily perilous for someone to reinvent themselves?

MH: Oh no, it can be very good to reinvent yourself. Bettie Page got a lot out of her reinvention of herself, until the censors came down hard on her.  And so did Valerie, until madness took over.  I don't know that Bateman actually re-invented himself —  he's more of a monster hiding behind a mask.  I have to say that I don't really see Rebecca as a victim, because in the end she goes down into the basement, she faces her fears — and she gets herself thrown out of that school, which is a good thing!

Speaking of being image-conscious, you directed an episode of Fear Itself recently. I imagine this is because of American Psycho, so I have to ask: do you feel like you've been pigeonholed as a horror filmmaker?

MH: I'm kind of flattered when that happens, because I don't consider myself a real horror filmmaker.  It always seemed funny to me that American Psycho was in the horror section of video stores. It's more like a satire with horror elements.  It's ironic, because when I try to get television work in comedy I'm told that people think I can't do comedy! But my first three films have a lot of comedy in them, I think. Not Moth Diaries, that's more teen melodrama.

I just read Midnight Movies and saw that there's a note about your portrayal of Solanas in there. Having been a critic, I wonder how much you pay attention to criticism of your films and whether or not you're concerned with the way your films seem to be rather literally critiqued for not being period-specific or exaggerating details to elicit a specific effect.

MH: Hmm, I haven't read Midnight Movies.  Because I was a critic, I probably take reviews more seriously than other filmmakers. However, there is just so much to read now, with all the blogs and all the comments added in, it can become overwhelming and destructive. Maybe it's better to wait five years, until the dust has settled, and then read your reviews!

My first movie was very well received, but American Psycho and The Notorious Bettie Page both got mixed reviews and were understood better a few years after release. That makes me question the immediate reaction. Also, when I was a critic I sometimes gave bad reviews to things that I later found I liked.

Tell me about the way you film the past in your films' flashbacks: it seems your representations of past events is reliant on an understanding of nostalgia as being associated with dated technology, as in the flashbacks in The Notorious Bettie Page, I Shot Andy Warhol and now the black-and-white flashbacks in The Moth Diaries.

MH: I think that comes from all my early experience in documentary film.   I was a researcher in British television and worked on a lot of biographies of artists, which involved looking at loads of archive film in many different formats—black and white, color, 35mm, 16mm, super 8, video.  I think that's where I get my love of mixing different film stocks and formats together, and using them to evoke a particular era.

Do you think representations of LGBT characters in films have changed since you made I Shot Andy Warhol? I know you directed an episode of The L Word, and the notion of having an uncomfortable sororal bond is in both The Notorious Bettie Page and The Moth Diaries.

MH: Yes, LGBT representations have changed hugely in the last fifteen years.  Being transgender wasn't even part of a mainstream discussion.  The 'sororal' bonds in The Moth Diaries are quite complicated. Teenage girls pour all their emotion into their female friendships, which are very intense and quite romantic.  They fantasize about boys, and have relationships with them, but their strongest bond is with their friend. Those intense girls friendships can be very beautiful, and also very destructive when they go wrong. The relationship between Lucy and Ernessa goes farther than that romantic/platonic girl friendship, though…

I'm particularly struck by the contrast of strong femininity projected both by Page and by Solanas: the dominatrix and the man-hater. Given that Bateman is the most macho man in your movies and is a psychopath for it, it stands to reason that the independent women in your films are marginalized or still finding their voices. But I'm also reminded of how Solanas is asked what she will do for money and how she can get by without money. Trying to be revolutionary or even just different seems to mean you have to be misunderstood. By contrast, Bateman is misunderstood but accepted because he's a paragon of caricatured manliness, no?

MH: Well, as Bateman says, he's just trying to fit in! He's so insecure, and so obsessed with getting all the surface details right, that no one notices what's going on underneath.

Then again, one of the things that struck me about I Shot Andy Warhol is how Solanas comes to irrationally despise these two effete men of power, Andy Warhol and Maurice Girodias. Androgyny, in both that film and in The Moth Diaries, specifically with Ernessa, seems to be an indicator of a conflicted kind of enlightenment. Is woman the future of man?

MH: It's sad, because Valerie turned her aggression on the only people who encouraged her, Warhol and Girodias. They had their failings but they weren't the enemy as she laid it out in the SCUM manifesto.  Gay men like Warhol were supposed to be women's allies.  I don't know if woman is the future of man, but I do think artists tend to be androgynous, in sensibility at least…

Who are the filmmakers and storytellers that you feel influence and inspire you the most?

MH: Polanski, Hitchcock, Kubrick, Bunuel.  Also I love Howard Hawks, in all his different genres,  and thirties comedy for its wonderful lack of sentimentality and its brilliant pacing.  I love David Cronenberg and David Lynch, and admire the careers they have, in which they never stopped making interesting films. Gus Van Sant was another inspiration for me. Drugstore Cowboy caused a big revelation, that you could actually make a movie like that.

What are you working on next?

MH: I'm attached to a film called Wicked/Lovely that is based on a young adult novel.  It has a lot of visual effects and is expensive, so the producers are still working on putting the money together. Then I have a couple of other projects I'm working on, but it's too early to talk about those!

Simon Abrams is a New York-based freelance arts critic. His film reviews and features have been featured in The Village Voice, Time Out New York, Slant Magazine, the L Magazine, the New York Press and Time Out Chicago. He currently writes TV criticism for The Onion AV Club and is a contributing writer at the Comics Journal. His writings on film are collected at the blog, Extended Cut.